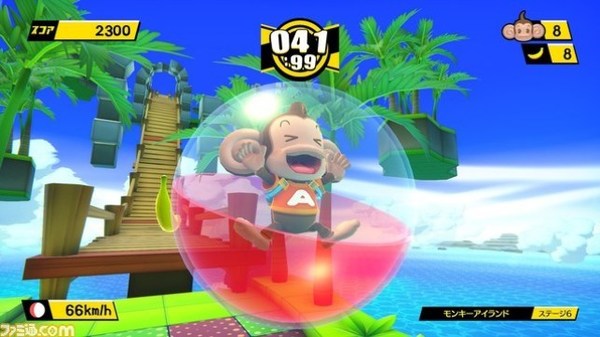 Famitsu had the chance to talk to SEGA's Toshihiro Nagoshi and Masao Shirosaki, two devs working on Super Monkey Ball: Banana Blitz HD. The duo were asked to elaborate on the new features for this outing, as well as some tweaks to the original game. Check out a translation of those portions of the interview below, courtesy of NintendoEverything.

F: So in Banana Blitz HD, while you’ll be adding in new features and leaving in ones that passionate fans enjoy, you’ll also be balancing the difficulty for those who are brand new to the game. Is that right?

Shirosaki: That’s correct. We’re making the beginning stages easy to beat, however the latter stages are giving our developers a real run for their money. When I finally cleared all the stages in the game, I shouted, “YES!” (embarrassed laughter) I didn’t even realize. I really think players are going to get a great sense of accomplishment when they try the game out.

F: In addition to remaking Banana Blitz, you’ll also be adding new features like “Time Attack Mode” and leaderboards. Could you tell us how you came up with them?

Shirosaki: After development kicked off, I wondered how people had been playing the original version, so I decided to look into it. I found out that there were players who would beat stages with clear times and techniques that the developers didn’t expect. There were even people who explained how to do these “Time Attack” methods on video sharing websites. We mulled over what features to create that would quell passionate fans like these, and that’s how we came up with “Time Attack Mode”. And then the leaderboards were just an obvious inclusion that made sense when paired with “Time Attack Mode”. We were able to add these components relatively simply thanks to the added power of modern consoles, so it was a no-brainer.

F: In addition to “Time Attack Mode”, you’ll also be adding a new “Decathlon Mode”, too. Could you tell us how this came about?

Shirosaki: We put together 10 different mini-games but we thought it was kind of a shame that they could only be played in multiplayer mode. So we tried to figure out a different style of play that used all the mini-games, and that’s how “Decathlon Mode” came to be. It’s a mode where the player challenges themselves to beat 10 mini-games in a row. We can’t share any further details just yet, but there are going to be a lot of hidden features in there, so please look forward to future announcements.

Nagoshi: I think fans will really “go bananas” for the gameplay and the price of ‘Super Monkey Ball: Banana Blitz HD. I’m very happy that this is a new opportunity for as many people as possible to play the game.

Will it have motion controls? That's a deal breaker for me.