Digging themselves out of a hole
20 July, 2019 by rawmeatcowboy | Comments: 0 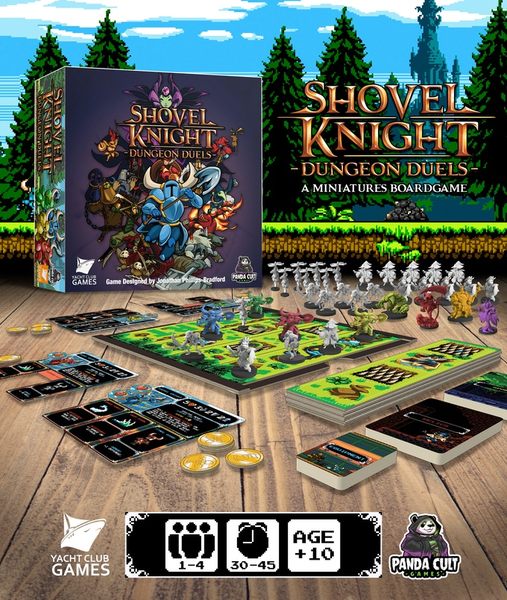 Yacht Club and Panda Cult Games recently teamed up to launch a Kickstarter for Shovel Knight: Dungeon Duels, a board game adaptation of the series. That Kickstarter has now been cancelled, and will be relaunched in mid-August 2019. It turns out the teams involved wanted to take some of the pledge feedback they received and rework things to make the project more affordable overall, and also implement some changes to the game itself. Check out the full explanation for the relaunch below.

We would like everyone to know that we have decided to cancel the current campaign for Shovel Knight: Dungeon Duels...to dig in and relaunch the campaign mid August!

Why relaunch the Kickstarter?

We have heard our backers loud and clear about their love of Shovel Knight as well as what their expectations are, and that is immensely important to us. At Panda Cult Games, we loved playing the Shovel Knight video game, so much so that we reached out about making a board game out of it! We also absolutely adore the boardgame we have put together. As a small team, it’s supremely important to us to care about what we do and what we are working on, as well as treating it with the proper respect it deserves. We believe this campaign can be better, and we have plans to improve it and open it up to a much wider audience with a more cost-friendly version to boot! We have also seen your questions, comments, and concerns. We want this campaign to be the very best it can be, because that is what Shovel Knight deserves.

What are we changing for the relaunch?

One of the most common comments was about our base pledge price, and similar ideas on how to adjust it. Our original idea was for the board game to have beautiful models based on the incredible and lively art that carries so much of that Shovel Knight charm in it! That being said, models do introduce a certain price point issue, so we decided to create a brand new pledge level that will include a version of Shovel Knight: Dungeon Duels with standees instead of models! This will dramatically reduce the barrier of entry from $70 to $30-$35. So we will officially have two pledge levels:

Shovel Knight: Dungeon Duels 2D, priced at $30-$35. This version will trade out models for standees, reducing the costs but still giving you all the fun of the boardgame!

This is the first change. Additionally, we will have more videos available on the campaign from multiple groups sharing previews and their thoughts on the game! We will also have more time to spread the word about our campaign farther and wider than we did before.

We feel like this is the right decision for this campaign, and feel confident that a relaunch will do Shovel Knight proud. We also hope you agree! As backers, we cannot thank you enough for your support and input. It means a ton to us at Panda Cult Games, because without you, our dreams couldn’t become a reality!

If you have any questions, comments, or input, feel free to comment or message us. We will try to respond in a timely manner, due to gearing up for the next round. We’ll be sharpening our shovels, and we hope you join us in this new adventure!