Earthbound's creator recalls his time spent with Satoru Iwata, and how Iwata believed he would recover 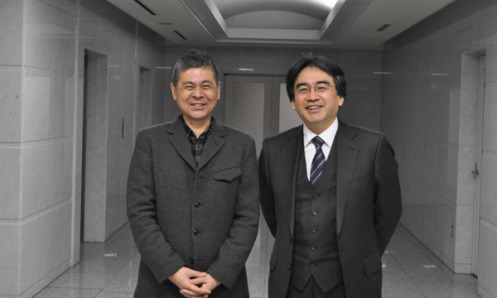 IGN has been pulling quotes from Iwata-san, the book Earthbound creator Shigesaot Itoi put together to celebrate the late Satoru Iwata. Itoi himself had some words to share on Iwata, which you can find below.

“Iwata said that the vision behind his business was to make everyone happy: himself, his friends at work, and his customers. He used the English word for ‘happy’ instead of the Japanese word, which charmed me. It’s funny how you remember the most insignificant things, but whenever Iwata used the word ‘happy,’ he would show you the palms of both of his hands. That’s something I don’t think I’ll ever forget.

On the day of Iwata’s funeral, it rained in torrents, and Miyamoto and I were waiting around. Suddenly I decided to ask him how much chance Iwata himself had believed he had to be cured. Miyamoto responded immediately, in a very natural manner. ‘He totally believed that he would become better. He didn’t have the slightest intention to die.’ That answer made me realize just how close Miyamoto and Iwata were, and to what extent they understood each other.

It’s hard to describe how I felt when first meeting Iwata. There was something very pleasant about him. Without even really knowing him, you could immediately feel that he was someone you could trust. What I really appreciated about Iwata is that he was never insecure, and he would never show off or get mad just to show his authority or anything like that. That’s why you could have long conversations with him without things ever becoming awkward in the slightest.

All we would do is talk, to the extent that my wife once said something like, ‘All men ever do is chat!’ In Kyoto, I would come up with an excuse to meet him somewhere in town and have a chat, and then we would continue our conversation over lunch, and we would still be talking after coming back home. I remember how Iwata would throw a ball for my dog while talking, then my wife would take the dog for a stroll and when she came back we were still talking. Sometimes a conversation that started in the afternoon could last until after 9pm.

As the head of a big company, he probably should have been accompanied by someone, but Iwata always came over to my office just by himself. He would grab a cab, and as he rolled his suitcase, I can still hear him say ‘Hello there’ with that high-pitched voice of his.”

"On the day of Iwata’s funeral, it rained in torrents..". Kyoto (and the whole world) was crying and it seemed like rain.

I saw the headline and I can't bring myself to read the full article. Iwata is one of those deaths that still hurts...

What a pal to hang out with. There is never gonna be a man like Satoru Iwata ever....

"The only problem is that, if there is some good-for-nothing idea I come up with over the weekend, I have no one to share it with the next Monday. That I can no longer hear him say ‘Oh, about that thing…’ is a bit of a problem for me. It makes me sad.” -Miyamoto

We didn’t hear about his bile duct tumor after he stated he was recovering from it. Even with him not appearing at E3 2015 in response to his health, it never came to much emergency. I would imagine if he knew of his passing, he would have stepped down some of his executive positions at the time.

These stories about Iwata make me smile and super sad at the same time. There really was something about him I liked and appreciated. Wish he could see the success he helped usher in.

Also wish I could have met him.

Talk about crying over video games. For Iwata I am always balling my eyes out. You are so damn missed.Iwata you can't even imagine.

I didn't start actively following games (specifically Nintendo) until partway through the Wii U era, and didn't become familiar with Iwata until around the time of his death. Even so, when I looked back on my time playing incredible games on Wii, DS and Wii U and realised how important a man he was to these experiences, I cried on the bus home. This was before I even knew how amazing of a human person he was through Iwata Asks and other pieces. It hurts every time I finish a game and read the credits to not see his name.

We will never Recover because he was truly a unique and special person.

I think he just said to all the sad people here: "It's OK. Please understand!"