2K has released a Japanese trailer for NBA 2K20, along with the Japanese cover art for the Switch version. 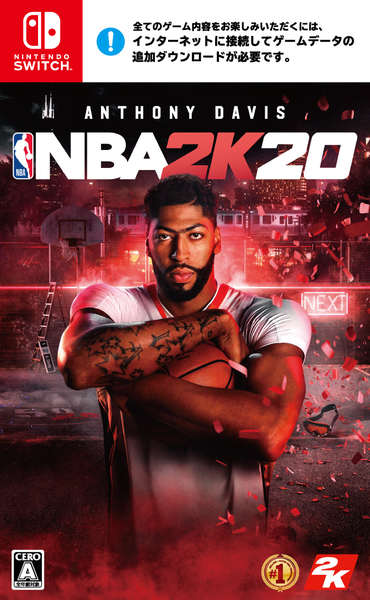 The cover art confirms that those who buy the physical version of the game will still need to download additional data, and a microSD card will be required. This seems to be the case for all regions.

And straight in the waste basket this goes. You can't revive a turd. 💩

I disagree I plan to download this when it comes out

Good for you. Do you also approve of their forcing customers to sit through ads on a game that they paid $60 for?

I had the game since launch I did not have to sit through anything and if they were ads you can turn it off, another thing you forget these things play while the game loading , so it’s not like they took time away from you playing

Game gets a bad rep because the people who play it or not good. They assume you need to pay to win, but it’s not true the most you can level up by paying is up to level 85, to get higher you must play the game and gain experience points to unlock new levels, while gaining these experience you also unlock badges that make your player better and more important than leveling up. I’m a season vet I know how to play, so a person like me would unlock most of my endorsement earlier on, someone new to the series or not that good would take more time they would probably be better off in their second season.

Endorsements are gain by playing well I have not unlock the last endorsement but my character make 2400 coins each game, basically you end up with so much money you do not know what to do with it, so it’s not pay to win, also 2k gives out money every day and they also do nba quiz if you know your history you can win 1 million coins last time 4 people tied it got split in 4 ways each person 250,000 coins

They basically giving out the same money people claim that you have to pay for smh 🤦‍♂️ but the narrative will say you got to put to win.

Another reason the franchise so good every mode literally give you unlimited amount of hours, you can choose what you want to do

My career you start from nothing to something, each season players get traded or new people sign to new teams, so each season is never the same, one team can make the finals than next season they do not make the playoffs a player leave for more minutes or etc, basically anything can happen to give you more challenge to get that championship

My GM lets you be the owner of a team you can relocate where you want the team to be maybe in another state or whatever, you control trades, prices of everything, it’s basically a sim of controlling a team, and you have to build a team fans want to go and bring championships to your team, each season there will be trades or people looking to switch to another team, it’s endless what you can do with each season being different from the last

My league is basically letting you control the official team and go through the season like past nba games if you remember nba live 2005 or nba court side for GameCube we use to pay 60 only for this mode alone and we was happy,

2k giving you all 3 and many more for small price of 60, each mode is endless if they wanted they could sell each maybe for 30 to 40 dollars you will end up putting anywhere from 150 hours to 1000 hours

Well, you are a true fan of the series. That much is clear. Does it bother you when they drop the price to $2.99? That could happen again with 2K20.

I’m guessing you’ll get so many hours out of the game by then it’s no big deal.

All sports games drop once the season end, I personally would not wait that long to pick it up

But like I said the price is good for new comers they get a little bit use to the system of how it plays and then when new version comes out or if they rather wait for it to be 2.99 again that’s cool also either way playing the old version mean you won’t have to start learning the game new animation from zero

Now computer was smarter to have someone leave their opponent open and run to the rim to help his teammate block my shot I was force to get more assist and pass to that wide open player......which force the defense to think twice meet me at the paint and leave a wide open 3 or guard the 3 point guy and let your teammate guard me one on one