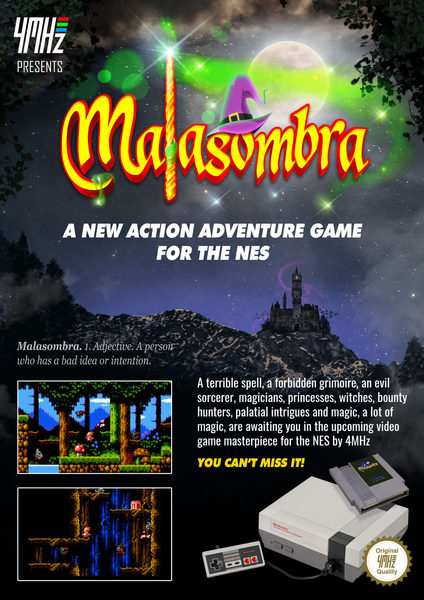 In a beautiful and distant place, the celebration of the royal wedding between Astrid, the princess of the kingdom, and Pirou, a young apprentice magician, is truncated by the irruption of Malasombra, a sorcerer resentful against the king for condemning him to exile time back because of his perfidious advice.

Malasombra turned everyone present to a frog except Pirou, who managed to repel the spell with his mad wand as a magician’s apprentice, and kidnapped Astrid, as a revenge for so many years of punishment in exile.

Pirou could not leave things like that, so he prepared desperately to find a way to recover his beloved.

Malasombra begins its development in March 2018 with various concept tests and scenarios for Amstrad CPC. During the first months of development, the project was maturing history and growing in dimensions, until in October 2018 graphic and programming tests began in NES. After the first satisfactory results, the team decided to migrate the platform project, becoming an exclusive development for NES. A very complicated decision for the whole team, because it means leaving the comfort zone, but with the certainty that it was the right decision given the ambition placed in the project.

This initial phase of development culminates in mid-August 2019, with the official announcement of the project in different media, and the presentation of a playable demo in real console at the GAMESCOM Restrospiel stand, thanks to the collaboration of José María Velo (octopusjig) ..

Currently, 4Mhz is fully focused on the development of this project, which, even without a definite date of publication, monopolizes all the effort and enthusiasm of the team.

Malasombra is going to see release on actual cartridges for the NES, as well as digital for play on an emulator.

My NES is ready. Love it that fans keep these old consoles alive like this =) Wonder if it will ever happen with Wii U though. I just "feel sorry" for the gamepad since it has so much untapped potential.