The next SEGA AGES title detailed
21 August, 2019 by rawmeatcowboy | Comments: 0 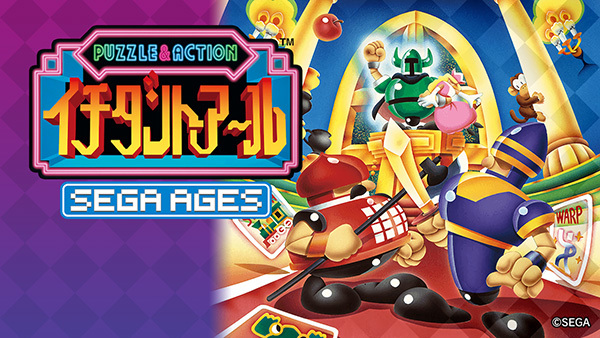 The next entry in the SEGA AGES lineup is Puzzle & Action: Ichidant-R, and it's set to launch in Japan soon for 925 yen. You can check out a bunch of screens for the game here, and read up on all the details about this revamp below.

The odd duo return, only this time as a pair of knights in a medieval world. Players must clear four stages and 10 rounds of mini-game battles to save the princess kidnapped by the Demon King. The vivid graphics only available in the arcade version are reproduced in this version. If you use the helper, you will start the game with 20 hearts and there is only one quota per mini-game, so you can play faster and more casually.

Rather than a simple port of the arcade mode, a “Quest Mode” in which you can enjoy RPG-esque scenes is implemented. Additionally, up to four players can compete in “Competition Mode,” which was not possible in the arcade version. It supports both TV mode and table mode, allowing players to enjoy the game whether playing on their own or in a group.

Free Mode – Earn points based on your performance. The player who reaches a certain number of points first will win. Up to four players are supported.

Play with other players across the country in the arcade version. While it is a cooperative gameplay mode in which the game progresses so long as either player clears the mini-games, it still is a competition of which player is quicker to clear the mini-games first. Show off the skills you honed in Arcade Mode.