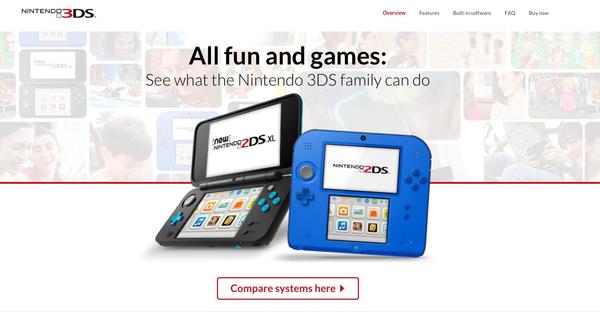 Remember back when the 3DS was the 3DS, and not some iteration of the 2DS? If Nintendo does, they're trying to forget it. Nintendo's official North American website for the 3DS now advertises nothing but the 2DS. Yes, they may mention the 3DS in passing, but when you go to look at actual hardware, all you get are 2DS options. Looks like Nintendo is riding out the rest of the 3DS' lifespan by forgetting why it was called the 3DS in the first place!

Long live the 3D effect! It was actually one of the reasons why I bought it. Still have it on when I play.

Next it's Switch for the Switch Lite -_-

What's a Switch? I only see a Switch lite

Long live the 3D effect! It was actually one of the reasons why I bought it. Still have it on when I play.

Me too. I always loved the 3D feature, especially once head tracking was added later.

I guess the world just wasn’t ready for glasses-free 3D gaming yet. The 3DS was just too good for this world. It will be remembered fondly. I know I will miss it.

Nintendo should keep supporting all their old consoles with new big first party titles. The limits of each platform can be further explored within the art of creating games. And many millions of old consoles can be fresh again with just one first party title coming to it. I'm still waiting for another fresh Zelda game for my 3DS.. Or bring a fresh huge IP to Gamecube and the value of these consoles will skyrocket : D

This would have been ideal during the sixth generation of gaming, where costs were reasonable, graphics plateau to an acceptable level and variety in genres had yet to be snuffed out, but it is far too late for that. Some third-party companies out there are still doing crazy stuff like making new Dreamcast games, but I doubt an actual company like Nintendo would ever do such a thing.

While companies like Nintendo can really make a change here, so that is pretty unfortunate. I think it's a shame how my super powerful Wii U console has been swept aside by Nintendo just to let us buy yet another machine.

You would be a terrible business person.

Just saying, when we all are forced to buy new machines every few years to play a fresh game, we'll all suffocate in our machines one day.

Even with the New 3DS, which had MUCH BETTER tracking, the 3D for me would eventually get annoying and I would turn it off. I think with 3D TVs and Nintendo continuing to put less of a focus on the 3D as the 3DS' life progressed (compare Super Mario 3D Land and A Link Between Worlds back in 2013, to two of the most recent releases (Warioware Gold and Kirby's Extra Epic Yarn) having none at all*). They were probably also tired of parents thinking the 3D will blind their child (hence the need for the 2DS).

All in all, it was a neat gimmick, and that's totally fine if you like that gimmick (I say that with no condescension), and maybe there will always be a small audience that really liked what 3D offered, but it's clearly a niche market and most people that wanted an immersive visual experience have moved onto things like VR, I presume.

*Luigi's Mansion 3DS had 3D, and that's a game where it totally fits because the room structure of that game is already so similar to little dioramas.

could this means that the 3DS is dead.

Does Nintendo provide support for fixing new 3DS XL? I'm asking because I got my top screen damaged and I would like it fixed when I go abroad.