Another amazing action title from Platinum
26 August, 2019 by rawmeatcowboy | Comments: 6 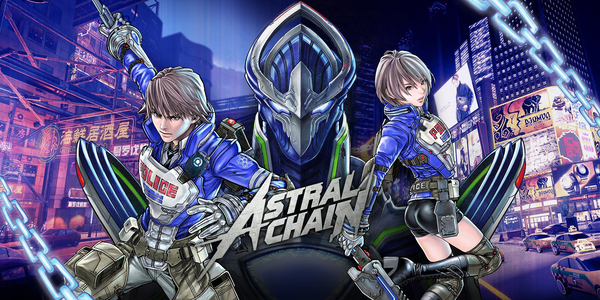 This review was written by NintenDaan, and edited by RMC.

Titles made by Platinum Games are quite special to me. When my interest waned in character-driven action games, Platinum got me back into the genre with their amazing titles. It’s hard to resist fresh experiences like Bayonetta or NieR: Automata! Those games, while rough in a few spots, were still all sorts of wonderful. The cutscenes and bonkers gameplay ideas resonated with me more than I initially expected, and left me hungry for more.

Platinum’s latest effort in this genre is Astral Chain, which comes from the mind of Takahisa Taura. Following his work on the NieR: Automata game, Taura sits in the director’s chair this time, and his fingerprints are all over this project. It’s Taura’s input that leads to not only an incredible experience, but my favorite game of 2019 so far. 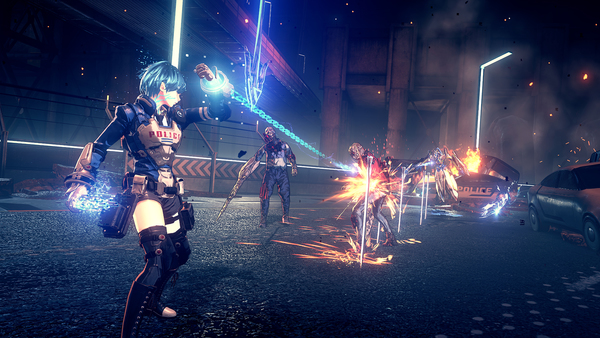 Astral Chain takes place in the year 2078, where the human race is on the brink of destruction after a catastrophic event 40 years ago. Chimeras, terrifying beings from another world, have taken over various countries, and in turn, have made large portions of the world uninhabitable.

A group of resourceful people have fought back by building ARK, a massive, multicultural city with a particularly skilled police force. While ARK remained safe for some time, the Chimeras attacked once more, this time with a mysterious red energy. Enter Neuron, a special task force that uses modified Chimeras, known as Legion, to fight back. You take on the role of a character who can, for an unknown reason, control all Legion without trouble. This leads to you becoming the go-to person for ARK to call on when times get tough.

Right from the jump, Astral Chain feels different from action-driven titles before it. The game tends to focus on the chapter at hand, rather than teasing you about what’s coming down the road. Instead of giving you hints on new weapons or abilities, these are dropped into your lap with little foreshadowing. This helps the game feel extremely fresh, and keeps you engaged in what’s at hand. Throw in the story cliffhanger at the end of every chapter, and you’ve got a recipe that’s hard to resist.

A game’s story is only as good as its characters, and thankfully, Astral Chain features a very well-written cast. Their motivations, decisions, and general feelings evolve throughout the adventure, which makes for a very compelling journey. You’ll definitely want to see how the various story arcs play out, and the entire experience has a quality anime vibe to it. The only bad part is that the lip-syncing is based on the Japanese voice track, which can be a bit jarring. 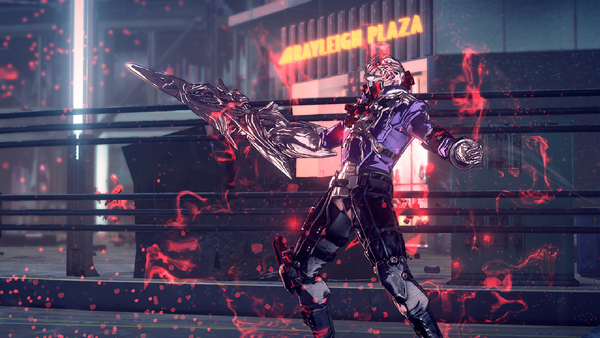 Astral Chain’s gameplay is handled throughout multiple File chapters, which leads to a mostly linear experience, rather than an open-ended one. This isn’t a knock against the game at all. Astral Chain’s story is key to the experience, and it’s clear that tackling things through a rigid chapter structure is what works best. Luckily, there’s also plenty to do in order to fully clear a chapter.

The general gameplay loop starts you off with some exploration, where the player is tasked with following Chimera tracks, chatting with various NPCs, and taking part in side missions. These missions include capturing thieves, beating down groups of thugs, finding a lost dog, battling in secret Chimera spots, and much more. Completing missions rewards you with points and items, so it’s important to take them on.

Once you’ve done some snooping and found the information you need, you’ll end things with a wrap-up talk. Here you’ll be given a set of key phrases to recap the journey you just went on, recalling what you’ve learned. This is why you want to make sure you’re a good listener while you make your way through each chapter, as answering quickly and correctly pays off.

While the chapter structure stays the same, it’s the variety of tasks you take on which keeps things extremely entertaining. For example, in one chapter you’ll end up heading straight for a Chimera gate at the start, which leads to a risky encounter. Another chapter focuses more on the exploration and investigation duties of Neuron, with battles taking a backseat. While every chapter has you fighting, talking, and investigating, it’s how Astral Chain plays with these elements that keeps the experience deeply enjoyable. 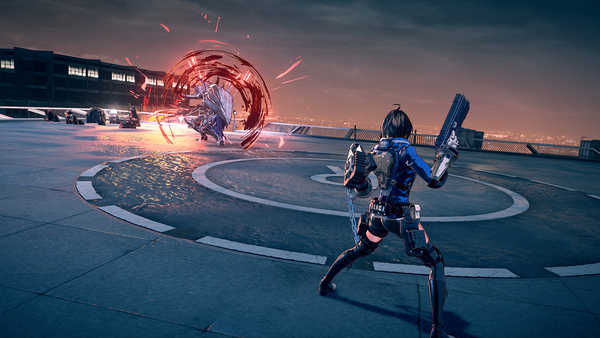 One of the strongest elements in the game are the Legion; trustworthy companions that will help you throughout your adventure in numerous ways. These fierce-looking creatures offer up a wealth of interesting abilities, including encircling enemies, covertly listening to conversations, keeping you safe as you traverse hazardous environments, and much more. Each Legion you come across will also have a feature that’s unique to its type. For example, the Axe Legion gives you a defensive shield that blocks projectiles and poison gas. There’s also the Beast Legion, which can use its keen sense of smell to follow a trail otherwise invisible to the player.

As you might expect, Legion are a crucial part of Astral Chain’s combat as well. The game uses a synergistic system that allows you to control both the Legion and your avatar at the same time. For the avatar side of things, you can use a special X-Baton that transforms into a slew of different weapons. Freely switch between a gun and two swords to dish out the damage. You’re also able to dodge enemies at the very last second, which allows you to run up behind them and get in an extra-powerful attack.

Legion mix it up in battle with unique combat styles. The Axe Legion is slow, but offers an instant shield, and strikes with great damage. The Sword Legion is lightning-quick and strikes hard, but is really lacking in the defense department. Thankfully each Legion has a skill tree, which you can climb in order to pad out some of those weak spots. Working your way through this tree will be the key to building up an unstoppable Legion force.

The mechanic powering this avatar/Legion synergy is the synchronization meter, which needs to be watched during battle. The longer a Legion is out on the gameplay field, the lower the gauge will get. Let it empty completely, and that Legion will have to be taken out and recharged for a bit. You can avoid this by switching over to the avatar solely during battle and landing a few good hits on the enemy. Every strike you connect with will fill up the synchronization meter a bit, allowing you to keep your Legion of choice active in battle longer. 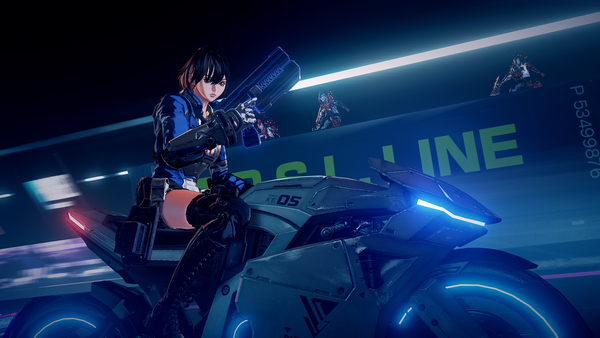 You’ll definitely want to keep that meter filled in order to take advantage of special Legion/avatar merge attacks. These moves see both the avatar and Legion join together to really put the hurt on an enemy, but they require a large portion of the synchronization meter. This makes keeping a watch on the synchronization meter not only necessary, but a fun little game in and of itself. Learn to keep tabs on it, and you’ll be rewarded with access to devastating attacks.

As you make your way through Astral Chain, the game will throw a ton of different mechanics and elements at you. Thankfully, Astral Chain handles these features with grace, and doesn’t overwhelm the player. Their distribution has a natural cadence to it, letting the player feel at ease with the new abilities before adding in something else. You’ll start off sans Legion, which lets you learn the ins and outs of your X-Baton. Soon after that the Legion are introduced, and you learn about how the avatar and Legion work together. As you make your way through the chapters, you’ll learn more about the options available to you in battle. All of these elements are given time to grow, which lets everything sink in that much better. Before you know it, you’ll be out on the battlefield controlling both the avatar and your Legion with ease.

Tying the whole experience together are the striking visuals and top-notch soundtrack. Astral Chain’s unique art style brings the ARK to life wonderfully, really conveying the atmosphere of a world filled with despair. Character models are expertly crafted and feel lively, deepening the connection to the game’s world. These stunning visuals do result in a few framerate dips, but they’re nothing in the grand scheme of things.

The soundtrack is, in my opinion, one of the best to hit Switch this year. There’s an insane amount of tracks to enjoy, which are perfectly married with atmospheric sounds to really heighten the experience. You even get an anime-style intro, which comes with its own fantastic theme song. There’s just so many tunes to keep an ear out for, and the audio experience is fantastic from start to finish.

As stated in the beginning, Astral Chain has been my favorite Switch experience of 2019. The amount of grandeur in the gameplay is simply unmatched. The best part about the whole experience is that the overall theme to the game just works. The human race is on the path to absolute destruction, and it’s your destiny to step in and prevent that. This sets the stage for an action-packed experience that's an incredible rush, and it never lets up. From opening cutscene to closing credits, Astral Chain keeps you on the edge of your seat, and you’ll love every second of it.

Excellent review, Daan! I was already hype for this game, but now I'm absolutely stoked.

Well, my interest in this game just went up considerably. I though the whole cop aesthetic was just backdrop, but hearing about how you'll also be spending a considerable amount of time investigating mysteries, exploring, and interacting with NPCs sounds with a whole bunch of side-quests sounds right up my alley. Especially since you said the game's story is less concerned about the setup towards some sort of constantly-foreshadowed goal (which sometimes makes me feel like I'm rushing through a game just to get to the big payoff) and more just taking things as they come.

I might actually have to pick this up now.

It's kind of like Xenoblade X and God Eater had a baby.

Not gonna lie, a new IP on a Nintendo platform from Platinum made me nervous, seeing how the last one went for them. Glad to know I'm wrong; now to wait and see how sales go.

I don't doubt the quality of this one at all, just not sure it's for me. If/when I can get it for a cheaper price online, I'll definitely give it a try though.

Does anyone know how long the game is? Downloading it now anyway, but nice to know.