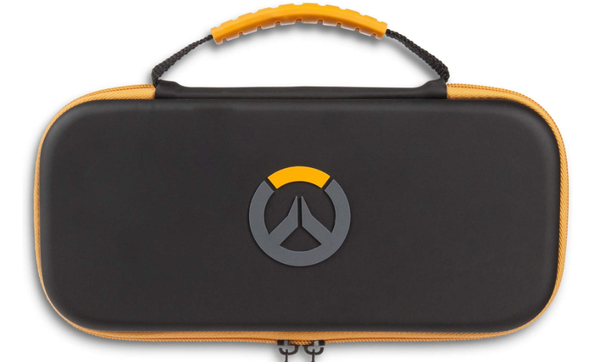 Looks like we might have just caught wind of a big surprise release for Switch. Amazon recently added, and then removed a listing for an Overwatch Switch case from PowerA. Why bother making a themed case for the Switch when the game it's based on isn't even available on Switch? It doesn't make much sense, which is why some are thinking that a port of Overwatch could be heading our way.

While the listing has been removed, you can still check out details on the case below.

Take your Nintendo Switch on the go with this sturdy compact case Designed precisely to fit the Console in handheld mode. Inside you'll find a felt lining, Overwatch logo Tag, screen-protector flap with storage for nine game cards, and zippered mesh storage pocket. This portable case with Overwatch design gives you the freedom to have fun on the go with your Nintendo Switch. Wherever. Whenever

If it wasn't related to a release, they would have had no reason to remove it. I think it's safe to say this is happening.

I can hear the bells of the September Direct approaching

That's nice and all, but Overwatch's days are over and I don't see myself going back to it. The game only became relevant in the first place for its Blizzard branding and waifu-bait and was kept alive solely through its massive marketing/eSports (a.k.a. marketing) budget. Its relevance has been fading for a while now with people most charitably just getting bored with it (as I did), if not outright pissed off by the numerous controversies surrounding it.

Honestly, if it weren't for the Blizzard name behind it and the pandering female characters, it probably would've be no bigger than any of TF2's other rivals like Monday Night Combat. At this point, a Switch port is too little, too late, at least for me. Even if they make it F2P (which they honestly should at this point anyway, since its loot box profits dwarf its actual sales).

I never played Overwatch but I have played Paladins and heard it was similar. I dont care for Paladins. So I assume I wont like Overwatch but I rarely see people talk about Overwatch anymore. I think the most I've seen of Overwatch is rule 34 and even that seems to be dying down a bit. Lol

I've played both and Overwatch was a lot better to me

It's a neat game, but I got bored of it long ago. Still, it really would be something to see it running on Switch. Maybe there's still an untapped audience in the Nintendosphere that will like it.

I think I'm all Overwatch'd out. But this would be a good Switch release and if I ever wanted to play the game again, this would be the way to do it.

If this is happening, they really missed the boat.

Overwatch fits really nicely into Nintendo’s environment and would have done very well with Switch’s audience, had it actually come out when Overwatch was more relevant.

Instead we just received non-commital comments about how Overwatch couldn’t be done on the switch in a way that would keep the experience true to the what it is, and then maybe they could do it but they want to focus on other platforms.

Now Paladins has already taken any player base this game would have had on the Switch, and the rest don’t care because Overwatch has largely faded from the spotlight.

Personally I would have snapped up Overwatch on the Switch and bought it a 3rd time if this had happened at least a year ago.

But now? With the wave of incoming titles, I’ll pass.

Maybe they did this intentionally to preleak the leakers.

They keep airing Overwatch tournaments on DisneyXD, so how irrelevant can it really be?

Yep, Paladins is FTP, has more characters, more maps, much better and fair incurrence in-game and more gameplay modes that are actually fun to play, still those type of games are getting replaced by Battle Royale games.

Seems to very likely at this point after this!