Digging up some gold
06 September, 2019 by rawmeatcowboy | Comments: 1 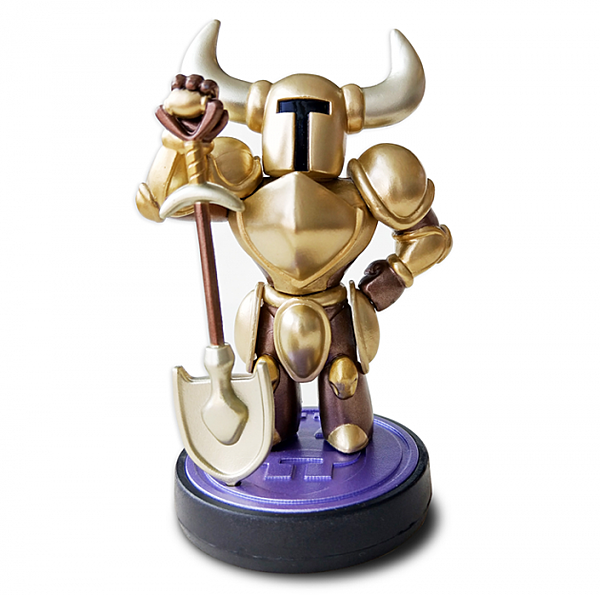 We've been reporting on rumors of a gold Shovel Knight amiibo for so long now that it's hard to believe it's finally confirmed, yet here we are! The listing went live on GameStop's website earlier this week, and now Yacht Club has shared an official rundown on the amiibo and what it does. Check out full details below.

Flashy! Decorative! Useful! You may have heard whispers of such a treasure. A beshoveled knight that shines like gold! Today we’re happy to finally confirm the legends are true! Let’s unveil one more surprise for Shovel Knight amiibo!

In addition to the original true blue Shovel Knight and the upcoming Plague Knight, Specter Knight, and King Knight — you can now upgrade your collection with a Shovel Knight sporting what is objectively the greatest armor in the game: the Ornate Plate! What a magnificent sight!

This makes it a perfect choice if you always wanted to try out these great additions but were never quite able to track down the original Shovel Knight!

When does it come out?

Can I scan the Gold Edition amiibo through the box, like the original Shovel Knight amiibo?

No, due to requirements in packaging it is not possible to scan the amiibo contained within the Shovel Knight Gold Edition without first removing it from its container.

Will the Treasure Trove amiibo work on Switch? 3DS? Wii U?

Support for the Gold amiibo will be added to Wii U, 3DS, and Switch versions of Shovel Knight with the arrival of King of Cards and Showdown in December.

Do I need the amiibo to play co-op in Shovel of Hope?

No, co-op is available from the start on all console and PC versions of the game. No amiibo necessary. We recommend trying out a double Custom Knight co-op run if you ever get the chance!

Will you ever "reprint" the original Shovel Knight amiibo?

Since it has the same in-game features, you can effectively consider this Gold Edition as a kind of reprint of the original!

Is this a limited item?

This is not an intentionally limited item. We hope everyone who is interested can find it!

Is this a US exclusive?

No. We expect it to have similar availability as the original Shovel Knight amiibo. More store listings will come online soon!

Will it be available at an online or retail store near me?

We’d recommend contacting your nearby store to ask them!

Is it really made of gold?!

Much like King Knight’s crown, Shovel Knight Gold Edition amiibo is not made of gold.

Can I scan the Gold Edition amiibo through the box, like the original Shovel Knight amiibo?

No, due to requirements in packaging it is not possible to scan the amiibo contained within the Shovel Knight Gold Edition without first removing it from its container.

That answer doesn't make any sense to me. I think Nintendo perhaps told them you have to put the foil on the bottom like every other amiibo. You know, part of what enticed me to buy the original Shovel Knight amiibo was that I could scan it without removing it from its packaging.