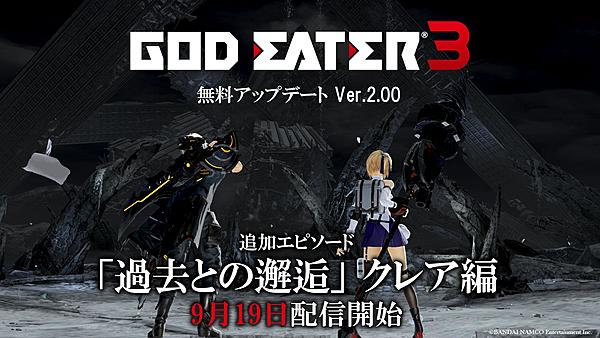 Bandai Namco has confirmed that God Eater 3 will be updated to Version 2.00 on Sept. 19th, 2019. We've already shared all the details on this update, but you can see a complete recap on what it offers below.

The second round of free updates will feature an additional episode dubbed “Encounters with the Past.” In version 2.00, the first chapter of that story will unfold via Claire’s chapter, where you will head to her Sympathy Domain in order to strengthen your Engage. Hugo and Zeke chapters will follow in version 2.10, with the additional stories for other ally characters due out after. Bandai Namco noted that after version 2.00, updates will be released at a faster pace than normal.

—“Encounters with the Past” will be added to the “Additional Episodes” menu.
—By completing missions with your allies, your Sympathy sync rate will rise. Episodes unlock by increasing sync rate.
—The new costumes that were previously teased are included in the version 2.00 update.
—As is the new Aragami, Ash Forged Barbarius Ira.
—The “Ash Forged God Arc Parts” and “Ash Forged God Arc Parts (Alternate Color)” are also included in the update, respectively equipped with the “War Cry” and “Blade Impulse” Burst Plugins.