Out of the blue, a brand new Brain Training/Age game has been revealed for Nintendo Switch. The new game focuses on training with Joy-Con as well as the touch input you know.

The first new feature is the usage of the motion IR camera in the right Joy-Con. It will read the shape of your finger so that you can solve simple math problems. We will have to find out how quickly it can pick up movements in this fast paced setting. There are multiplayer options too, allowing you to battle one-on-one for those big brain results. Two examples given are a bird counting minigame and a game where you have to hold the Joy-Con a certain way.

While the game sees a lot of new, the traditional game modes like Calculations and Sudoku return as well. Some even take up a similar real-estate as the Nintendo DS games, forcing you to hold the system vertically. For the best input, it is recommended that you get the new Nintendo Switch stylus/Touch Pen. The pen comes with the retail version, which is sold at 3480 yen. Obviously, you can also purchase on its own from the Japanese My Nintendo Store, where it will be 864 yen.

The Brain Age Check makes a return, and is mostly played in this vertical orientation. If you want to be reminded of your daily training, you can use the newly added alarm function and set a time. The system will rumble, telling you it is time to get started. The new Brain Training mail option will send your progress over email, seeing how your family members are performing.

In a post-release update, you will also be able to compete in Global Competitions. It is here that you can battle with your friends with the highest scores in certain activities and the Brain Age Check.

Brain Training for Nintendo Switch will be releasing on December 27 in Japan. The official Japanse website can be found here! 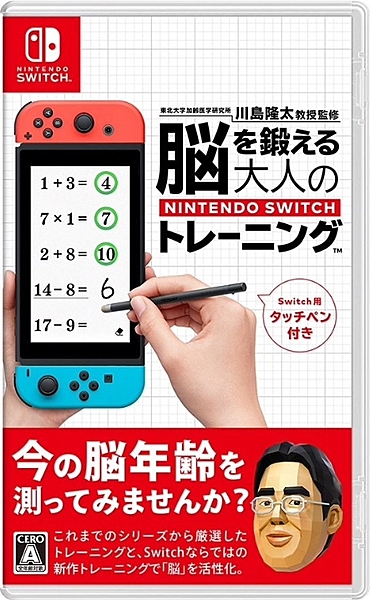