Will you buy a Mario Kart character, or dinner for the family?
09 October, 2019 by rawmeatcowboy | Comments: 16 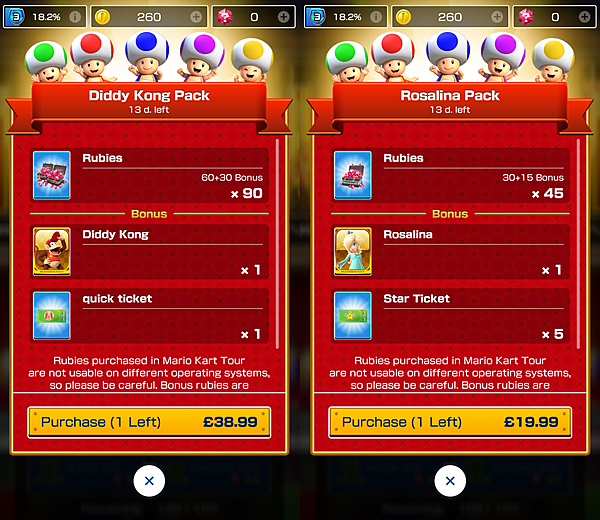 Mario Kart Tour got a major content update today, and with that comes some new character packs that you can pony up real cash for. Unfortunately, these packs require quite a hefty sum from the player. The Rosalina Pack is priced at £19.99, and includes 45 Ruby gems, Rosalina and five Star Tickets. The Diddy Kong Pack costs £38.99, and it includes 90 gems, Diddy Kong himself, and a Quick Ticket. Not exactly money you just drop into the game without considering its impact on your wallet!

Tempers are gonna flare quickly in the discussion thread. :p

If Nintendo's current mobile cycle is anything to go by I'll pass on Tour and wait and see if they announce Mario Kart 9 at next year's E3.

I doubt that they would release Mario Kart 9 since they ported 8 on Switch. I mean, since when has more than one Mario Kart game arrived on a Nintendo console?

That may be true that no system has gotten more than one Mario Kart title in the past, but I would be disappointed if they didn't break that tradition for Switch. Back when they had a handheld system (GBA, DS and 3DS) alongside a separate console it was understandable to just release one Mario Kart per system. Now there's only Switch, so that port alone just doesn't cut it.

Actually, for them, that port not only just cut, it is one of their best investments. It was much less expensive than making a brand new game and it is the best selling game on Switch. Last holiday quarter alone it sold over 3 million units (almost as much as it did on launch), and it sells over 1 million units in every other quarter. If they are working on a new Mario Kart, I don't see why they'd be in a hurry to release it.

I'm with you. Maybe they won't make one, but I want NEW Mario Kart. And I think I'd even be happy with a new batch of cups for MK8 as DLC.

I'm beginning to worry about if Nintendo will go to the Konami route....

And yet compared to what some of the kinds of games expect players to pay, this is actually a good deal... sad...

Man, it's a fun game, marred by how expensive all the "micro"transactions are and how much is locked behind the "gold pass".

So far I'm having fun with the game, but I refuse to spend money on it. So far, the only mobile game I spend money on is Pokémon Go, but I spent less than $5 and have been playing since day one.

The way I see it, you are paying the rubies and getting the character as a bonus. There was a $20 set the first 2 weeks with an included Mario.

These characters can be unlocked normally using rubies you earn in game. If you don't want to spend extra money you don't have to.

No thanks, Nintendo. Even us fans have our limits.

I'm already done with the game. Free-to-play things usually just feel gross, and this is no exception.

Personally I don't see the big problem here. You get so many courses and races for free, does it really matter who you have unlocked and what carts you have overall? Considering this isn't a game used for tournaments and obtaining real world prizes and is made to play for a bit and then move on with your day, why is it a big deal that Nintendo charges people to unlock stuff like this? As others have said, you can still possibly unlock these items by just playing. Are people so concerned about a scoring system they share with their friends, that has no impact on anything, that you feel you're forced to buy these characters and carts?

I'm still using Toadette, her standard car and glider that was originally unlocked and consistently get 1st place in races and get new courses without issues. Is the problem that most people here, who are complaining aren't able to get over 10th place and races aren't unlocking for them? I'm generally curious as to why this is such a big deal for a company to make money on a product they produced.

I agrre!
There is no such thing as "free games".

In fact, there are:
A) digital/physical full releases that all people pay to play them.
B) F2P games, which some people enjoy the tasting part for free, and some pay to play more offerings of the title. Without the later, the game doesn't exist (good bye, Miitomo).