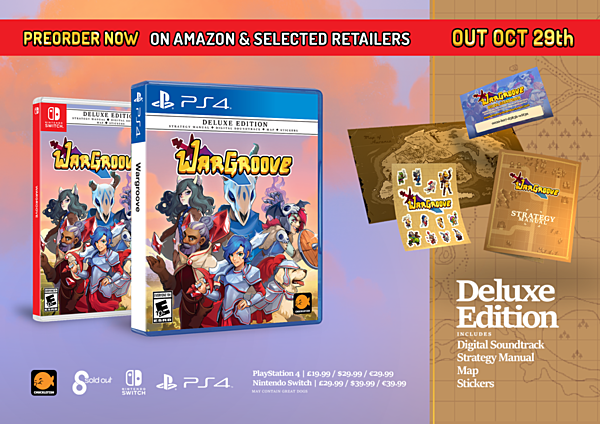 Wargrove "Double Trouble" DLC was announced today, but that's not all that's going on with the game. Wargroove's Deluxe Edition, which was announced quite awhile ago, is set to launch on Oct. 29th, 2019. Check out a refresher on that package below.

Don’t forget that the Wargroove Deluxe Edition physical is coming to stores later this month on October 29th for PS4 and Nintendo Switch, so make sure you get pre-order soon! The Deluxe Edition includes a physical cart/disc copy of the game, a downloadable version of the Wargroove soundtrack by Phonetic Hero and Boss Battle Records, a Commander sprite sticker sheet, a poster map of Aurania (Outlaw version!), a mini Strategy Manual with stats and tips on all units (available in English, French, Italian, German & Spanish) as well as a reversible coversheet!