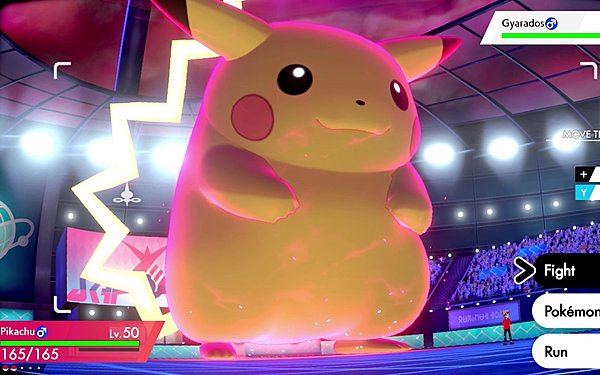 What was Game Freak's goal in creating Pokemon Sword and Shield? That's simple...the team wanted to make the greatest Pokemon game ever. That's exactly what Game Freak's Shigeru Ohmori sad in an interview with Game Informer.

“We set out with the idea of making the ultimate, strongest, the best Pokemon game yet, being on Nintendo Switch, the first time an all-new generation is coming to a console. It was really just every facet of the game: gameplay, visuals, everything. That was really the theme for when I set out making the game: the greatest Pokemon game.”

It's true that Pokemon Sword and Shield pushes the Pokemon mainline games in some new and interesting ways, including the Gigantamax mechanic. You can check out some new footage of Gigantamax Pikachu, Eevee, Charizard, Meowth, and Butterfree below.

Game freak, this will not be the greatest game you've made simply because

1 All Pokemon won't be there for whatever excuse you have.

2. Graphics while decent are not great being on switch.

3. Adding mechanics that no one asked for such as having gyms exclusive to each version.

I strongly agree complaining about the excuse number 1.

There are no version-exclusive gyms. There are minor league gyms and major league gyms, and the league in which certain gyms are will vary from version to version. For example in Sword the Ghost-type gym might be in the Major league, while in Shield it's in the Minor league. You're getting upset over nothing there, friend.

You forgot "lots and lots of GenWunner pandering... again..."

He says this every generation, but this time he couldn't be more wrong.

I’m looking forward to the game but honestly can’t get excited about the whole Dynamax/Gigantamax gimmick. It just seems dumb and completely out of place, even moreso than Mega Evolutions. They were dumb but a lot less so. They just come across as a cheap way to artificially inflate the game.

I’ve no problem with regions not having every Pokemon. That’s pretty true to life in ecology. Same goes for the unique forms between regions.

I’ve no problem with regions not having every Pokemon. That’s pretty true to life in ecology. Same goes for the unique forms between regions.


That's not the problem... if it was people would be upset with every generation and every game, since there isn't a single Pokemon title to have every Pokemon.

The problem is the Pokemon absent from the region are not coded into the game... you can't even trade them over.

Yeah but it’s not a problem. It’s not going to hurt the gameplay if I can’t have 800+ sitting in a PC box.

No, but if you're the kind of person who's been training the same Pokemon since Gen 3, you're gonna want your whole collection on the same game...

Also, isn't their some subscription based transfer service that doubles as a Pokemon box? I'm trying to recall, but if you can't move your Pokemon into these new games, don't they get stuck there?

I think you might be talking about Pokémon Bank?

The gigantamaxing stuff just feels like a full-blown jumping-the-shark moment to me, it feels like a flailing, sophomoric idea coming from a studio who is seriously lacking ambition, creativity and scope.

Maybe the story will explain it but what’s stopping Evil Team Whatever from just destroying the place with a Gigantamax Pokemon? Or what happens if you accidentally trigger it inside your own small home?
None of it feels like it fits into the game or lore of the series.

Yeah it doesn't feel like an idea that was properly thought through, at least with what we know right now, but honestly, I can't see any story being able to get them out of this corner they've put themselves in.