Reggie Fils-Aime on the Wii U's failure, Iwata against Wii Sports being bundled with Wii in U.S., the Activision Blizzard Hong Kong controversy, and more 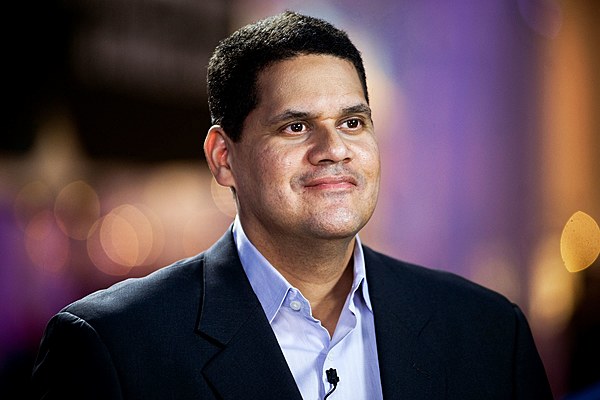 Reggie Fils-Aime held his previously-announced presentation at Cornell yesterday, and as you might expect, he talked a lot about Nintendo. Wondering what the Regginator had to say? Check out a summary of the event from one of the students who attended below!

- Reggie acknowledged that the Wii U was a failure pretty bluntly, but he called it a "failure forward" since it led to the Switch
- Reggie talked to the Japanese side of Nintendo quite a lot, and they usually called him Reggie-san
- Iwata didn't think Wii Sports should be bundled with the Wii in the U.S.
- Reggie said he learned the value of "silence" in business from Iwata
- Reggie emphasized the importance of having a workforce with a variety of races, genders, and sexual orientations
- Nintendo of America has internal diversity programs that supports groups of women and LGTB people at the company
- Reggie says China is a very different market, and praise the consumer response to Activision Blizzard
- Reggie was asked about Mother 3 at the presentation, and laughed, saying he thought he'd finally escaped that question
- Reggie says Retro Studios has some control over their release dates in a similar manner to the Pokemon Company (may need clarification)

I'm not entirely sure what he means by the 'value of silence', but if he's talking about not commenting on controversial situations, that makes a lot of sense. Too often companies make a bad situation worse by saying something dumb.

I'm not entirely sure what he means by the 'value of silence', but if he's talking about not commenting on controversial situations, that makes a lot of sense. Too often companies make a bad situation worse by saying something dumb.

I know we dont have full context but I assume the "value of silence" was more directed at certain business and marketing decisions. Nintendo has had a long history of being very quiet on projects/announcements...example the hype that builds out of thin air for Nintendo directs.

The Chain of comments below you got deleted so I'm just going to re-post one of my previous comments for trivial reasons. This comment wasn't directed to you but instead the user known as Light Wolf, I just think it was good to have for the conversation.

Kids shouldn't be tied down to such shallow aspects like their skin tone or sexuality in order to feel more secure/ validated. You don't need to be white to relate to the struggles of a hero or the inner turmoil of a youth as he goes through a coming of age story. I never needed all my heroes to be just like me, rather it's their inner workings that drove me to relate and empathize with them. Actually there were a lot of characters I loved because they were so different to who I am and that played a big factor to how I was able to connect with others.

Definitely! It’s valuable to relate to people that aren’t like yourself, as well as people that are like you. I wish I would have more LGBT representation to relate to, but I get to see a whole range of experiences I wouldn’t have otherwise through characters I can’t relate to as well myself

Well maybe they shouldnt considering all they had to show after Tropical Freeze was released in 2014 (though really finished development in late 2013) was Tropical Freeze again except with new Funky mode in 2018...Nintendo should really put a fire under their asses.

If we get a Breath of the Wild level Metroid Prime I'm willing to wait for a while, but I would like some reassurance once in a while.

They just made them work on the next Metroid Prime...

Yeah they did but what were they working on before they got handed MP4? You're trying to tell me it took 4 years to develop Funky Kong?

In my mind Retro was making the BBQ catering for NOA in that 4 year gap of time. They didnt have time to develop software.

We don't know what happened to Retro Studios during that time. Maybe they were developing a game that got canned and while Retro was working on it, Nintendo tried Bandai Namco but that did not turn out right.

And Retro Studios is a small division of Nintendo's. Unless Nintendo expands the studio more, there is very little that they can do to make games.

Besides, with all rumors lurking about that Retro staff had been less and all, it safe to assume that the studio faced some issues.

Indeed, a lot of small companies just have down time, when the staff shrinks down to a skeleton crew just needed to keep the company from ceasing to exist, as well as people to have contact with others. Rovio is an example, having not developed anything in a long time and just getting by on licensing fees for Angry Birds.

Since Retro Studios mainly works on other companies' franchises, though, more likely they've just been putting out low-profile, low-selling releases to keep stable or keeping said skeleton crew around and getting money coming in from the long-tail nature of their Nintendo-franchise games.

Iwata didn't think Wii Sports should be bundled with the Wii in the U.S.

Thank goodness this wasn't the case.