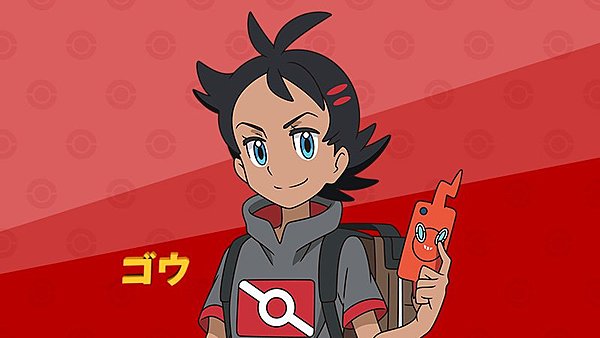 Since the first reveal of Gou, a new character in the upcoming Pokemon anime season, fans have been trying to figure out if the character is male or female. According to the Japanese voice actor for Gou, this design approach was done on purpose. The team behind the anime wanted to feature a character that left viewers guessing when it came to gender.

No guarantee the character will be ambiguous in the final game, where there will be more than a drawing to go on in terms of character identity. So it's not at all clear that this is such representation.

And the notion of a character who visually is ambiguous is nothing new in anime.

And as a guy with no legs and only 1.5 arms who has yet to find a video game or anime character who looks similar to him, and yet still enjoys video games and has a healthy view of himself, I just don't get the importance people place in 'representation' in games and media today. I'm not saying representation is bad. It's just that, trust me folks, if you hardly ever see anyone in a game or movie or TV show who reminds you of yourself in the way that makes you different from the vast majority of people, you can still be ok. Indeed, not seeking validation and/or one's worth in popular media depictions might very well a good thing.

I agree with the idea that representation is overplayed these days. As I grew up in school, most of the books they had me read featured characters that didn't reflect me in gender or race. But I never really had a problem with it, because regular people who have actual empathy can connect with what is human in another character.

Right now there are people throwing fits that their exact race/gender/sexuality hasn't appeared as a character in Overwatch or other games. Meanwhile I have to wonder if they really just lack human empathy.

Just to play devils advocate - I agree that lack of race/gender/sexuality representation shouldn’t matter to a persons ability to connect with a character - it doesn’t seem to effect my ability anyways.

But for some it does and it doesn’t hurt to have the representation in media. If 99 people out of 100 don’t care, then adding something for that 1 person isn’t going to change the 99. So it’s a win win to be honest.

To be fair, most creators are gonna make a character based on them in some way or another. While making other characters have characteristics they know from experience or media.

More than the inclusion in media, I think it says more about the diversity in the creation process and publishing side of things.

My take is that inclusion has to go all in, it feels shallow when there is a representative character that it's not good, shallow or inconsequential.

I’m gonna leave it there because the last time a thread on on this developed it just got removed for some reason even though the conversation was civil. We have differing opinions and can discuss it like adults! High five to us 😜

It seems very cynical, and really nonconstructive. Clearly they made this decision for themselves and not for you. If it makes the developers happy, what is the point in attempting to tear this down?

Its not hurting anyone. It clearly wasn't made for you and therefor your input really isn't necessary. You can watch the anime or not, but making comments like these really doesn't help anyone. In fact, it might hurt someone who would be happy to hear such news.

Its always important to ask yourself, "How am I helping? How am I contributing?"

I appreciate the question MYBODYISREADY. I've been commenting on the Internet since the days of dial-up AOL message boards. I've learned long ago to let that very mantra of "How am I helping" guide me when I choose to comment or not. I'm glad that seems to be your motivation also.

As far as it not being clearly made for me, I'm not sure how you can deduce that. I'm a potential viewer of animated programming. And the comments I made said nothing about whether I will be more inclined or less inclined (or neither) to watch the show because of Gou's design. That strikes me as an assumption.

It seems to me someone who is happy to hear about the thought process that went into Gou's design should in no way be obligated to be less happy because of my comments. Everyone is entitled to their own tastes. But a philosophy that says one shouldn't express anything besides excitement because people who are excited might not like it (which, correct me if I'm wrong, seems to be your point) is not, I suggest for consideration, a long-term healthy approach. It seems to tacitly affirm the notion that people shouldn't be, or at least probably won't be, as excited about something if they find out others don't share their enthusiasm. I personally believe that to be false. It also discourages discussion between people with differing viewpoints, and that presents a whole host of problems.

That isn't to say one should be a jerk about things. But that's different from expressing a lack of enthusiasm. We have different tastes, and that's ok.

As for my post itself, to be clear, my intention was not to tear the decision down. It is their choice. I was making two points.

1. The importance of not judging hastily. Regnilla characterized this design choice as "non-binary/gender fluid representation." But, given the history of the anime genre, having a character that is not visually clearly identifiable as male or female does not indicate actual non-binary/gender fluid representation. The Japanese voice actor did not say that Gou is non-binary or gender fluid, or that such considerations were behind the decision to make Gou's gender not immediately identifiable through the visual design. So, with no context to go on, the praise might have been premature.

Incidentally, I disagree with the notion that if some product isn't 'made for' a person, said person's input isn't necessary. I mean, is anyone's input necessary? But beyond that, someone who is not a member of a product's target audience can still have something meaningful and useful to say about the product.

Is it though? The post says it was just done to keep folks guessing but I figure the characters gender will be known to be either Male or Female from their first episode.

I’m not trying to knock your comment. Just saying you might not want to get your hopes up. It just seems like common anime/Japanese character styling to make a character “look” androgynous. Fire Emblem and Final Fantasy have lots of characters that “look” like they could be Male or Female on the outset but the characters always have defined genders.

More power to them if it’s not the case.

How do you pronounce the characters name?
Goo? Gow? Go?

It's just "Go". The u at the end of Japanese words/names adds a slight extension but it's not usually outright spoken that way.

Thanking you for the explanation.

In japanese I think it'll be Goh-Uh

Actually the guy who commented two spaces above you was right. A "u" ウ after an "o" syllable in Japanese simply elongates the ""o" sound. So it's like "go" but you just hang onto that "o" sound for longer than normal. 🙂

This is absolutely nothing new. There have been tons of female appearing males in anime, and even games, and even NINTENDO games before.

Maybe Gou is a Ditto that tried to copy humans.

Would be awesome if they were enby, but I don't think that's likely.

The original Japanese source talks about Gou being a Bishōnen, a concept that has absolutely nothing to do with non-binary or gender fluid on the slightest
If you keep posting nintendosoup articles, you'll end up with the same reputation of mediocre clickbait, mistranslations and fake news.

Disappointing nobody posted this