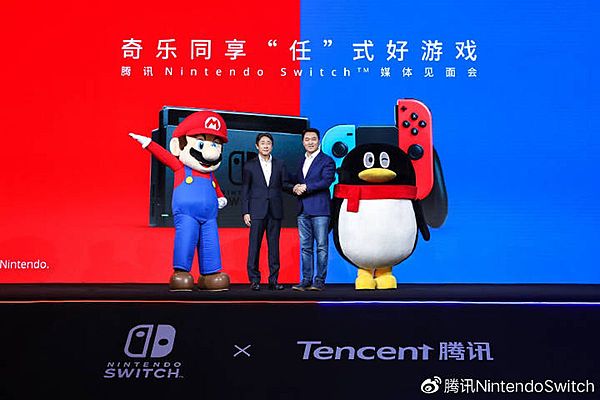 Nintendo and Tencent have partnered up to bring the Switch to China, but Tencent has an even bigger goal in mind. If they get their way, they'd like to makes some games featuring Nintendo's characters. A Tencent official told the Wall Street Journal the following.

“What we want is to expand from China, and one target is console game players in the U.S. and Europe. We hope to create console games with Nintendo characters, and learn the essence of making console games from Nintendo engineers.”

Tencent would certainly have a ton to prove with a move like this, as they aren't really known for games they develop in-house, and instead focus more on publishing titles from other devs. I'm not too sure Nintendo will be keen to let Tencent have the keys to their character castle, but I guess time will tell.

Who knows. Maybe Nintendo will let them use an old IP they don't care about, like F-Zero.

Nintendo get out while you can!

Nah, Nintendo isn't going to do that. Maybe they'll let Tencent use their characters LIKENESS like with Blizzard and Diablo 3 for Switch-exclusive content of their games, but making games with those characters? Not happening.

Exactly. We all know ow Nintendo protects their IPs. Sure, China is a somewhat different market, but that wont change Nintendo's pide. Nothing should.

Nintendo needs to pull out of this deal ASAP

Please fix, update, and support Arena of Valor on Switch!

Capcom is gearing up to celebrate the 20th anniversary of Mega Man Battle Network
May 29, 12:16 by gerjet
Nintendo restructuring their Brand Ambassador Program
May 29, 12:01 by ben_goldentriforce May 29, 04:05 by tlk777
PR - PQube teases new IP and announces 95% short-time discount to celebrate first Kotodama anniversary
May 29, 09:49 by conangiga
GoNintendo Video Feature - We played Clubhouse Games: 51 Worldwide Classics with Nintendo's Treehouse!
May 29, 07:25 by autumnalblake
Amazon France adds four placeholder listings for Nintendo titles
May 29, 06:00 by seansneachta