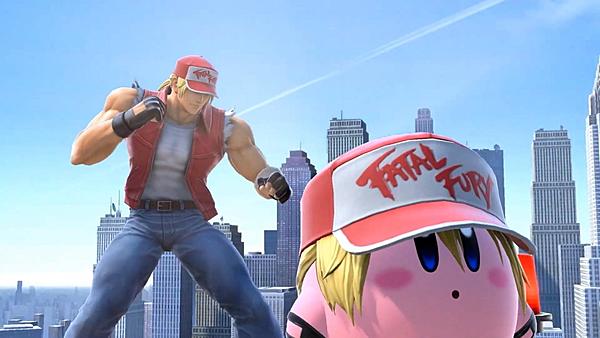 Terry Bogard is now available in Smash Bros. Ultimate, which means Kirby has a new transformation. In a new blog post, voice actress Makiko Ohmoto, who performs the voice of Kirby, explained how it all went down. Check out the full blog post below, with translation courtesy of PushDustIn and Ninten89.

So Terry participated in Super Smash Bros. I almost never play fighting games; I only played two of them: Street Fighter 2 and Fatal Fury, when I played it together with my younger brother who really enjoys them.

During the recording, they would always say “This is a character from a certain game” without actually telling me the actual title, but I remember hearing these quotes very much.

Yaaaay!! It’s Terry! And thus personally, my tension went up so much. I tried to imitate something like native English. Was that how his voice [sounded like] at that time?

Screaming the very famous finisher attack quotes of protagonists from games I played in the past, like SF2, Garou, and also Dragon Quest, is a really pleasant thing.

Recalling those memories is so fun. The people who created them should have had even more fun.

I just watched the video right now. Sakurai-san… he created over 20 models… He also included 50 songs… He always throws the ball with all his might in order to make everyone pleased the most as always, that’s really great indeed!

And Terry is cool~ If I can use him it’s going to be so much fun~ But it might look difficult Dear all veterans, please handle him well.

So much lore, dedication and passion has been brought into Smash Ultimate and yet people hate the DLC for not having what THEY want. Yaay internet.

I still love to see Mario fight against Piranha plant, Bayonettta, Ryu, Zelda, Simon, Peach.... Oh you get it!

Complainers have the right to criticize and continue to be miserable and unhappy.

As well as people wanting to keep on having fun, and messing around with the new toys.

If I complai about complainers, do I become like them? Do we need Nietzsche in this?

I'm only really a fan of Banjo and Kazooie games out of all the DLC so far, but I personally love the variety and respect the series these fighters come from immensely. Smash is all about celebrating the best and most iconic franchises and bringing them all together to duke it out. The fact of the matter is that every DLC fighter so far is really fun to play. Let the whiners whine.

If I have one complaint it's that I'm sad that we haven't gotten a few more Western characters. A Doom Slayer, Crash Bandicoot, Scorpion, or Lara Croft would be appreciated.

Me being old and a big fan of Mega Man, Pac-Man, Pianha Plant, Bayonetta, Street Fighter....etc...I am loving this.

My problem is that people whine like little brats for not getting what they want even when Sakurai and co have put so much passion into everything here.

Then again it has become the best selling fighter game of ages, so it might be the internet I am not happy with =)

Anyway, very curios to see who the next fighter is.

I think most of the people who are really nasty about their complaints are literally children, so I guess childish behavior from them shouldn't be too surprising. The rest of the tantrums are out of sad man children.

I'm loving the DLC too and don't want to go back to a world where we don't have a Smash reveal to look forward to in Nintendo Directs. It's worth $20/year to me personally just to have those trailers to look forward to and speculate about, and then we get to play them as well. I'm thrilled we are getting a second fighter pass and really crossing my fingers that there could even be a third if it keeps selling well. Let this game end up as the true Ultimate game in the series by the end of the Switch's lifespan... it already is, but Ultimater!