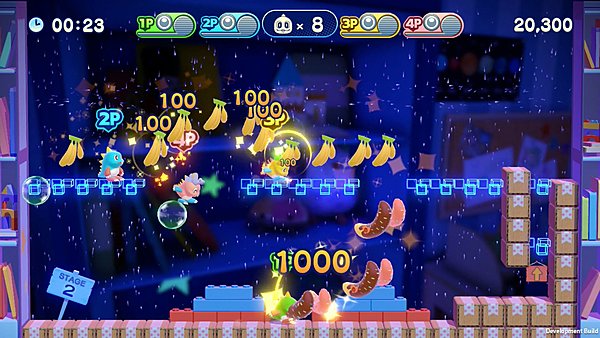 Bubble Bobble 4 Friends is launching very soon in Europe, and it looks to recapture the magic of the first game. In an interview with Dtoid, director Tsuyoshi Tozak talked about how the team prepared for this sequel.

"This project became a good opportunity for me to relearn game development by playing Bubble Bobble. The team first played the original version thoroughly and rehearsed it. Fukio Mitsuji, who was responsible for the planning and graphics of the first work, was also someone who had taught game development, so I sympathized with his way of working. This time it was decided that the game would be developed in 3D. We made sure that becoming 3D wouldn't change the playability and entertainment level."

What was most important to the team during development? Getting the bubbles just right, of course!

"It's a bubble action game, so we put a lot of emphasis on the presentation of bubbles. We've been thinking about how to make the bubbles look charming. At first we tried realistic bubbles, but in order to adapt them to the atmosphere, they gradually changed in a more illustrative style. Then there's questions like 'How should Bub and the others jump on the bubbles? Which forms should they have then?' With such thoughts, we also put much value on the depiction of the softness of the bubbles. We wanted to program their forms and movements at first, but we could not achieve a harmonious movement, no matter what we did. Also with regard to the processing load we came to the conclusion to manage these with manually created shape-changing methods."