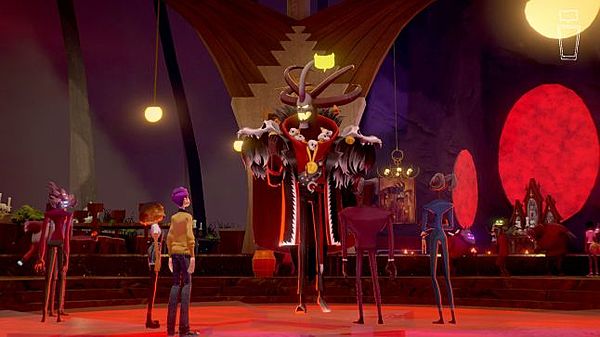 Night School Studio worked with dialog trees in their previous game Oxenfree, which took a pretty standard approach to conversation. Afterparty, the company's latest game, takes the dialog experience to a completely new level. While you start off with two dialog options, you can unlock a third by taking a drink, which leads to all sorts of branching conversations. Studio co-founder Adam Hines elaborated on the design in an interview with Gamasutra.

"We definitely wanted to make drinking be fun in this game and to be 100 percent fun and not be any sort of a hindrance or penalize you. Because in every other game...you’ll drink and the screen will get wobbly and you can’t walk. And we obviously can’t do that with this game because the entire game is about going to bars and having a drink and have that affect you.

...in this game of course if you’re drinking a drink and the drink makes you really angry, there has to be an angry choice for every possible time you can speak in that bar. That made it hard sometimes because it’s like if you want to challenge someone to a fight we have to let you kind of do that and have it somehow get back to the main plot and spiral out of control to this whole other game. That was the hardest part-- making it feel like you’re able to customize your experience as much as you would want to but not make a game that has 800 hours worth of content."