The connection isn't a coincidence
21 November, 2019 by rawmeatcowboy | Comments: 0 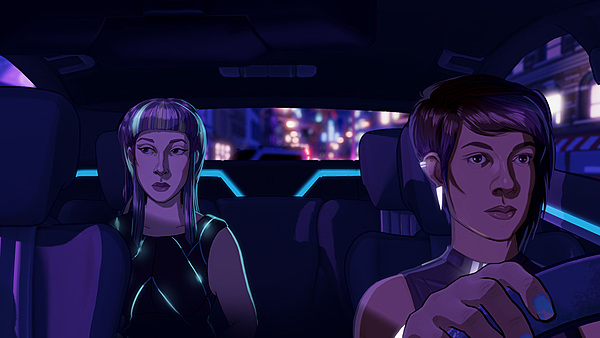 The 1949 noir classic The Third Man follows an American in post-war Vienna where the city is split up into districts controlled by the Soviet Union, Great Britain, France, and the United States. The story is filled with all sorts of mystery and intrigue, and ends up being much bigger than you might expect at first.

The same can be said for Neo Cab, where you play as Lina, one of the last human drivers-for-hire on the streets of Los Ojos. You start off with the story of a missing friend in a city filled with all kinds of secret activity bubbling under the surface. As you progress through the game, you unearth all kinds of shocking details that paint a much bigger picture than the game first lets on.

It turns out the connection between the two games isn't a coincidence. In an interview with USGamer, Patrick Ewing, creative director of Chance Agency, talks about how the 1949 book inspired their game.

"It was actually our writer Duncan Fyfe who told me to watch The Third Man. I think he was just like, 'this sounds a lot like the city that we're describing.' I think we kind of knew from the beginning that that's the sort of story we wanted to do. We wanted the elements of a bigger city and a conflict that's a bit out of your range as a person to sway in any way."