Get ready for an Atelier blowout!
22 November, 2019 by rawmeatcowboy | Comments: 0 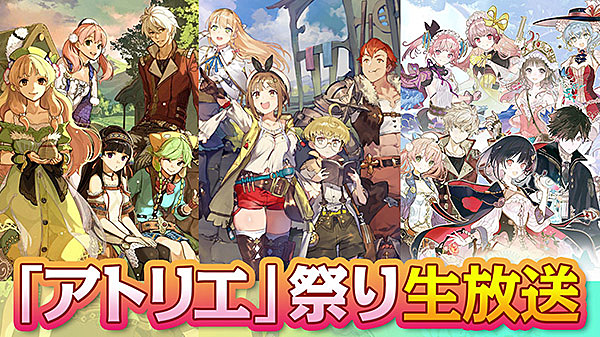 Want to know what's next for the Atelier series? Koei Tecmo has announced that an 'Atelier Fall Festival' live-stream event is set for Nov. 26th, 2019, and it's going to feature all things Atelier. Expect to get a look at the Atelier Ryza: Ever Darkness & the Secret Hideout “Claudia Story” DLC, live gameplay of Atelier Shallie: Alchemists of the Dusk Sea DX from Atelier Dusk Trilogy, and details on the “Ryza and the Secret Market in Shibuya Marui” event for Atelier Online set to begin on November 23rd, 2019.

Looking for something juicier? The official description for the event says that developer Gust “may also blurt out its enthusiasm and ideas for the next Atelier game.” Guests include Yuri Noguchi (Ryza voice actor), Shallistera (Kotori Koiwai voice actor), and Toridamono (illustrator), and presenters include Junzou Hosoi (Koei Tecmo Games) and Akira Tsuchiya (Koei Tecmo Games).