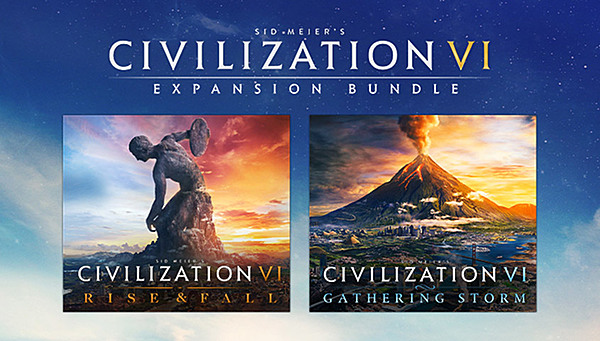 The Sid Meier’s Civilization VI Expansion Bundle combines both the Rise and Fall and Gathering Storm expansions. With the addition of 16 civilizations, 18 leaders, and major enhancements to gameplay, such as Great Ages and an active planet where geology and climatology present different challenges, the pursuit of building the greatest empire becomes an exciting endeavor.

GREAT AGES: As your civilization ebbs and flows and you reach milestone Historic Moments, you will move towards Dark Ages or Golden Ages, each providing specific challenges or bonuses based on your actions in game.

LOYALTY: Cities now have individual Loyalty to your leadership – let it fall too low, and face the consequences of low yields, revolts, and the potential to lose your city if it declares its own independence. But one civilization’s loss can be your gain as you inspire Loyalty among cities.

GOVERNORS: Recruit, appoint, and upgrade powerful characters with specialization bonuses and promotion trees to customize your cities, and reinforce Loyalty.

ENGINEERING PROJECTS: Shape the world around your empire to overcome unfavorable land conditions by making improvements like canals, dams, tunnels and railroads.

WORLD CONGRESS: Earn Diplomatic Favor through Alliances, influencing city-states, competing in World Games, and more. Use Diplomatic Favor to extract promises from other leaders, vote on Resolutions, call a Special Session to address an emergency.