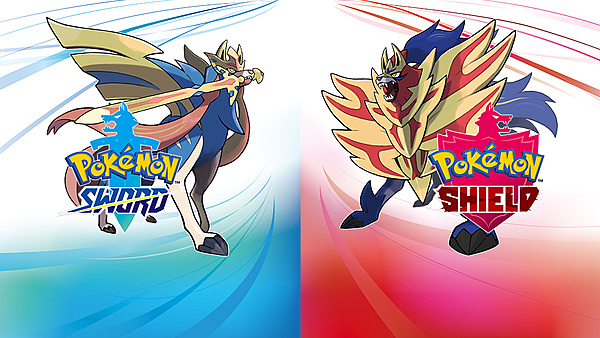 NintendoJam gives us his opinion on Pokemon Sword and Shield. Plenty of people will be diving into the game this holiday season, and hopefully they come away as impressed as NintendoJam was! - RMC

In 2018, Pokémon made its Nintendo Switch debut with remakes of the 1998 classic, Pokémon Yellow. Let's Go! Pikachu and Eevee where critically-acclaimed and financially successful, but fans were itching for another main-line entry in the series. Now, an all-new generation of Pokémon games are available for the very first time on a home console. Gen 8 has officially hit store shelves, selling a massive six million units in just its first three days on the market. Despite a loud minority of controversy on some inexcusable issues, Pokémon Sword and Shield are undoubtedly some of the greatest games currently available for Switch.

Explore the vast region of Galar with Hop (your newly introduced friendly rival), discover the secret of “The Darkest Day”, and learn the origin of the mysterious “Sword and Shield”. While the story is far from complex, following Sonia and Professor Magnolia on their search for answers on the perplexing “Dynamax” phenomenon is an adventure worth taking. Each character you’ll encounter during the main story-line is filled with unique personality. Along your exploration, you’ll learn about the history of your surroundings, and uncover the secrets of Galar. 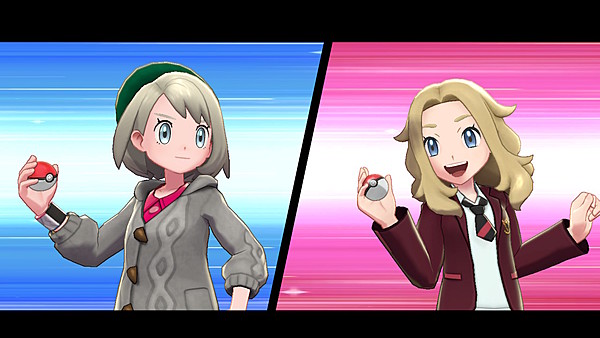 Your destiny as a Pokémon trainer is to defeat the Champion of Galar, Leon (older brother of Hop), who supplies you with your starter Pokémon to assist you on your journey. Leon will then provide you with the proper endorsement needed to participate in Gym Battles. All eight Gym Leaders (experts in the various Pokémon types) must be challenged and defeated before engaging in the final battle against the Champion. After selecting between Sobble (water-type), Grookey (grass-type), or Scorbunny (fire-type), your exciting expedition of training, battling, and catching Pokémon begins. 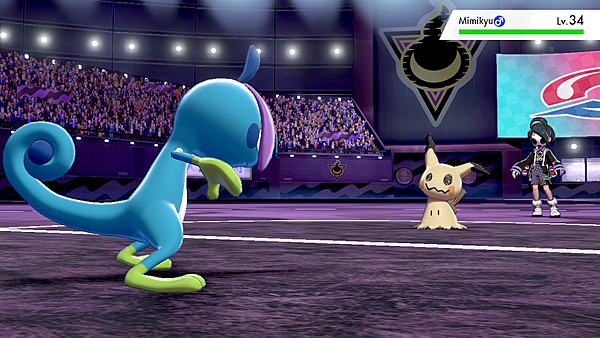 Gym Battles are some of the most competitive fun to be had in Pokémon Sword and Shield. Gym Leaders put up a decently fair fight, and each one has a greatly different personality and aesthetic. Before competing in a Gym Battle, you must complete the "Gym Mission". Each of the eight missions are unique, and involve playing a minigame-like test, as well as participating in a few Pokémon battles. These battles can cause quite a bit of damage, and if you immediately participate in the Gym Battle when you're finished, you may be up for a real challenge. If desired, you can visit a Pokéstop to heal your Pokémon before taking on the Gym Leader. A greater challenge would be invoked if this wasn't an option available. 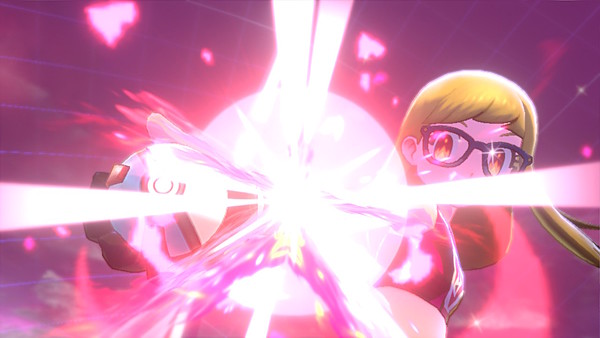 "Dynamaxing" your Pokémon can only be achieved during Gym Battles, but the new mechanic is incredibly fresh and thrilling. Both you and the Gym Leader can activate it once during a battle, and your Pokémon will stay Dynamaxed for three turns. The HD-Rumble feature on the Nintendo Switch controllers are fully utilized, and create a highly immersive experience during some heart-pounding Pokémon battles.

For the first time in series history, not all Pokémon from previous generations return, and the National Pokédex is a thing of the past. While dozens of Gen 8 Pokémon are introduced in the Regional Dex, hundreds of preexisting pocket monsters have been cut from the game. This means that transferring your data from past Pokémon adventures on Game Boy, DS, and 3DS is no longer possible, and you'll never be able to truly "catch 'em all". For experienced players of past entries in the series, this is an extremely frustrating development. Those who are being introduced to the Pokémon series, however, are in for one of the greatest Pokémon adventures yet. 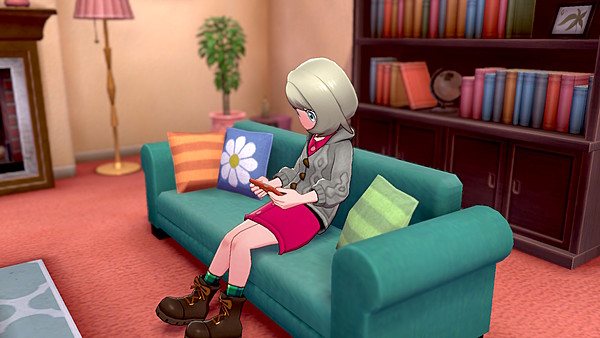 The internet has a way to create fear, and Pokémon Sword and Shield was struck by the beast. Talk of poor graphics and technical attributes flooded my Twitter feed, and I couldn’t help but worry about the atrocity that could potentially await. The Legend of Zelda: Breath of the Wild set somewhat of a precedent for Switch games, and these latest entries in the Pokémon series fail to reach that graphical fidelity and overall polish.

Despite overwhelming complaints, all worries drift away as soon as you actually play the game. Quite frankly, the game looks beautiful in both TV and handheld mode, and the charm of the art-style overshadows most of the technical issues. Just two years ago, we were playing Pokémon games at 240p with Pokémon Ultra Sun and Ultra Moon on Nintendo 3DS. With the jump to dynamic resolution of up to 1080p in docked mode on Nintendo Switch (with a pretty solid 30fps), the glow-up is pretty incredible.

There are certainly some undeniable issues with Pokémon Sword and Shield that should be addressed. For starters (get it, starters?), many character models and animation assets have been proven to be reused from previous Pokémon titles. This makes the lack of National Dex even more disappointing, but it doesn’t change the overall quality of the game, unless you put your focus on the finer developmental details. However, there are some very noticeable problems you’ll encounter. Lack of voice acting is understandable due to the pure amount of dialog options available throughout the game, but character mouth movements accompanied by pure silence is extraordinarily awkward. Render distance can make the disappearance of objects seem unnatural. There is an occasional slight delay in initiating Pokémon attacks. And finally, there isn’t too much difficulty until you reach the Champion battle and post-game content (if you know your Pokémon types and weaknesses). 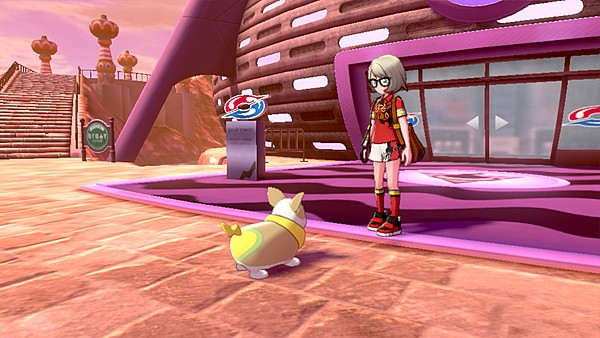 As you naturally progress through the game, and your chosen team of Pokémon continue to level up, battles can usually be won in your first or second try. Completing the main story, without actively hunting for Pokémon not simply encountered on your path, will take about 20 hours. Knowing which Pokémon types are effective towards your opponent is key to an exciting and fairly matched battle. Revives and potions can be found throughout Galar, or purchased from Pokéstops with money earned from winning in a battle against other trainers or Gym Leaders. Continuously using your supply of revives and potions during battle can make all the difference in terms of difficulty. Instead of Pokémon Sword and Shield feeling increasingly more challenging as you go along, battles just seem to take longer to win, which gives almost an illusion of difficulty. The first 20 hours are exciting, engaging, and very fun, but if you're looking for a challenge, that's where the post-game comes in. 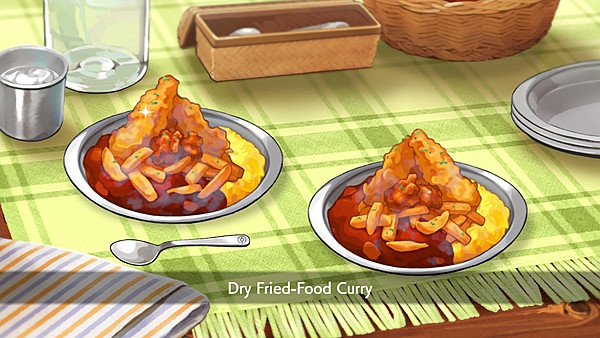 After the Champion is defeated, your adventure is only just beginning. Gyms are reopened for extreme challenges, and there is plenty more to discover. Creating more dishes with found ingredients to complete your Curry Dex is a fun feature available through trainer camps. Playing with or feeding your Pokémon (or someone else's Pokémon) is incredibly adorable, and increases their exp. and happiness level. 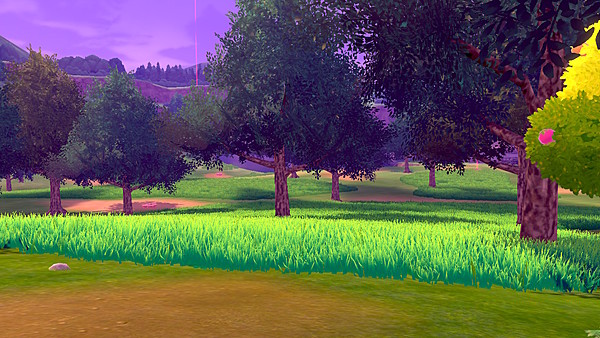 "The Wild Area" has been introduced to the Pokémon series in Sword and Shield, and your R-stick provides full 360° camera movement for the first time. While this area is also available during your playthrough of the main story, it provides plenty more content when you finally unlock the ability to catch all levels of Pokémon (each Gym raises your level catching ability by 5). Thankfully, random encounters are finally a thing of the past, and you always know exactly what battle you're getting into. Personally, I prefer the Pokémon catching mechanic of the Let's Go! series. Battling to weaken your opponent is more time-consuming and risky (make sure not to accidentally knock them out with too powerful of a move). Hundreds of Pokémon are waiting to be added to your Pokédex, and The Wild Area is an excellent addition to the Pokémon series. Good luck on catching some Shinies!

A new concept is introduced in The Wild Area, known as "Max Raid Battles" that can be accessed from Poké Dens. These allow you to team up with up to three other trainers online (Nintendo Switch Online membership required), to battle and attempt to catch a powerful "Gigantamax" Pokémon. Alongside this core attribute, there are plenty of other online features to explore, including trading and battling over the internet or through local communication. 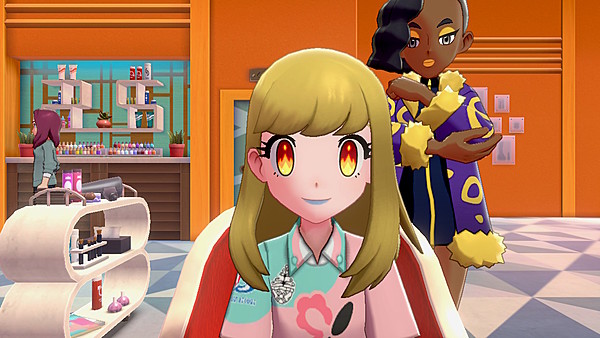 Plenty of options for customization are available in Pokémon Sword and Shield, allowing you to really personalize your experience. After your initial character selection, you have access to many clothing options, including Gym Uniforms (free when completing the gym), that can be purchased from shops available in the various towns. There are even hair salons, which gives you full control over hairstyle, hair color, make-up, eye contacts, and eyebrow shape. Customizing your character and creating your own personalized “League Cards” is a great way to pass the time (if you didn’t have enough to do already).

Pokémon Sword and Shield for Nintendo Switch is filled to the brim with new discoveries, and this review definitely doesn’t do it justice (no mention of egg hatching, Pokémon evolutions, TMs, different types of Pokéballs, and so much more). There are so many beautifully designed new Pokémon to catch, an incredible new UK-based region to explore, engaging battles to partake in, and dozens of hours of fun to be had. While it’s not a perfect game by any means, it’s an excellent series leap to home console. You’ve never truly experienced comfort until you’ve snuggled under a warm blanket with the latest Pokémon release in your hand, and with Switch’s hybrid portability, you get the best of both worlds (just make sure your Switch has air circulation).