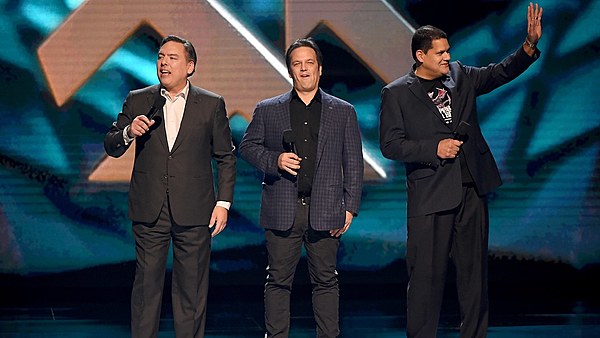 Geoff Keighley, creator of the Game Awards, hosted a Reddit AMA to answer some questions from fans. One of those questions was about the special moment when Nintendo of America President Reggie Fils-Aime, Sony Interactive Entertainment’s Shawn Layden, and Microsoft Xbox chief Phil Spencer came together on stage for a presentation. According to Keighley, that moment almost fell apart at the last minute.

“It was a dream of mine for a long time — since the first show. I asked all three of the guys personally and they agreed to do it, but it did take months of negotiations to make it happen. A few days before the show I thought it had fallen apart and I was really sad. But then magically it came back together. Producing these shows is always an emotional rollercoaster, but I’m really proud of that moment, and glad I was able to help make it happen.”

What we don't hear is what almost caused the entire idea to get scrapped. I'd love to hear the behind-the-scenes story on that!

It probably was Sony. They don’t like cross play.

“Who are those nameless guys up on stage with Reggie? Oh no he did it again!”

That was the concern.

People who watch the Game Awards know who Phil Spencer and Shawn Layden are.

Clearly you missed the reference.

That’s ok. It was kind of a lame joke.

It probably was Sony. They don’t like cross play.

Even though it was very badly scripted and performed, the idea was great. Very great even. We are gamers!

Why does Phil Spencer always have a funny facial expression? I love it.

I don't like that the Doritos Pope makes so many deals for exclusive news, annoucements, and trailers. He's such a shill, but he's doing his job in getting people to watch his ad-invested award show. On the bright side, there is bound to be something announced that I'll really enjoy.

Yeah, I only watch these "awards" for tge reveals self myself.

Ehh, the Game Awards aren’t all bad. The orchestra stuff they tend to do is always cool, and it’s nice when developers/actors etc. get awards and share their passion on stage. It is all one big marketing opportunity for game companies and companies not even tenuously related to the industry but I’d be lying if I said I don’t look forward to it when it comes back around each year since it started. Schlock is fun to watch every now and then.

Hopefully we get some cool stuff from Nintendo again this year. Top billed expectation seems to be a look at BotW 2 which seems out there but hey, we did get the debut of BotW gameplay at the TGAs years ago so could always happen.

Bayonetta 3 footage or any newz about that game and I'm a happy camper on planet Earth.

But sure wont be caring too much about the awards. We all know that Death Stranding will be GOTY, and all that e-sport crap...

But to each tgeir own, eh? Oh and yeah, something BOTW2 is very welcome.