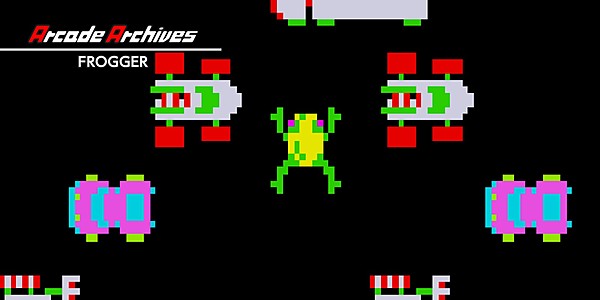 Frogger is an action game released by Konami in 1981. Guide a lost frog to the house on the other bank within the time limit. There will be many obstacles to overcome on the way home. Time your way safely across dangerous roads full of cars and rivers where alligators and snakes lie in wait.

Awesome! I like Frogger because it’s a classic arcade game that’s as big as Pac-Man and Donkey Kong!

By the way, try not to get any ideas about that December 12 release date.

Can you explain that second portion of your statement?

That last part is about Super Smash Bros. Ultimate and that the frog himself will join the battle. Some of the other users have already posted comments speculating about this.

If such a thing happens, we would have 4 fighters from Konami which is fine despite the company having a bad track record lately. Redemption is possible.

How does putting 4 fighters in Smash equate to a Konami redemption? ...especially if nothing particularly good comes from it? I mean, let's not forget all that great Metal Gear Solid support we saw after Snake was added to Smash... ...oh wait...

Greatness! I loved Frogger back in the day. I still think it holds up pretty darn good today. Will get! =)

Frogger for Smash. It'd be a character I wasn't expecting but didn't know I wanted

If they can turn Piraha Plant into a charming, great fighter theysure could do wonders with Frogger =)

*sigh* ...should have been Fawful... could have pulled off most of the same moves and is way more delightfully quirky... and better still, not a generic minion or yet another mainstream Mario character...

I'm all for it, maybe he'll be in the next pack after Nintendo reveals the next anime guy we'll most likely be getting.

Putting a normal, everyday frog in Smash sounds thoroughly impossible... unless they went with that absolutely atrocious anthro-frogger *shudders*...

Well no worries, we already have frogger :Greninja is just as weird, if not weirder of a pick, and he's in. But I do think a Taito rep like Space Invaders would be pretty cool. That or the Ninja Warriors.