Plenty of Pokémon to discover
11 December, 2019 by nintendojam | Comments: 1 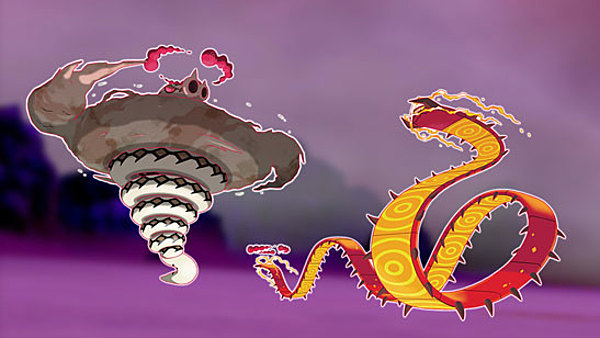 Six new Pokémon have been revealed from The Pokémon Company, as well as descriptions of the Gym Leaders you'll encounter. Two new Gigantamax Pokémon (Sandaconda and Centiskorch) will be available from Max Raid Battles until January 9th. Check out all the details below, and check out new artwork and more screenshots from the official Pokémon website!

The special Pokémon that are capable of Gigantamaxing can be encountered—very rarely!—in Max Raid Battles. But it seems you may have an easier time than usual encountering the Gigantamax Pokémon introduced in this release until January 9, 2020! 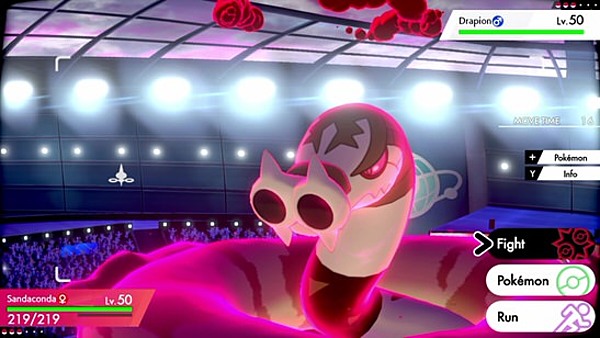 The sand that was once stored up in its sand pouch has overflowed and now forms a ring around Sandaconda’s neck. Together with the additional sand the Pokémon has spun up around it, there is over a million tons of sand now swirling around Gigantamax Sandaconda! To observers, it looks like a terrifyingly large tornado.

Gigantamax Sandaconda attacks by spinning its body at high speeds in battle, which causes the sand surrounding it to also spin at extreme speeds. The destructive force of this sharp grit is increased by the rotation and inflicts massive damage on those it touches.

Ground-type attacks used by Gigantamax Sandaconda will change to G-Max Sandblast. G-Max Sandblast doesn’t only deal damage to opponents when it hits. It will also cause them to be trapped within a tomb of sand that damages them every turn for 4 to 5 turns. It prevents them from fleeing or being swapped out, too. 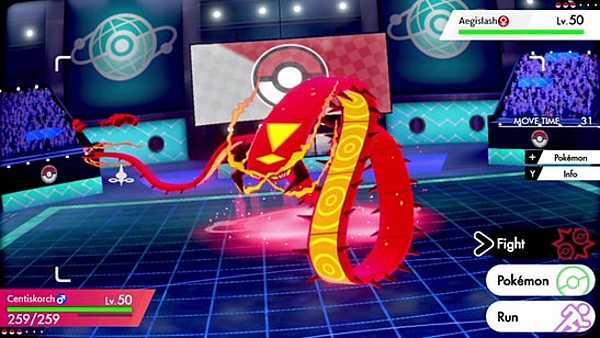 The number of segments in Centiskorch’s body increases due to the influx of Gigantamax power, as does the number of its legs—there are now one hundred of them! With these legs, Gigantamax Centiskorch is capable of astounding speeds despite its massive size.

Now it can really turn up the heat

Centiskorch’s firepower has increased significantly. Its internal temperature now exceeds 1,800 degrees Fahrenheit—hot enough that opponents are burnt from just the heat waves coming off the Pokémon. It seems that the radiant heat from Centiskorch can even disturb air currents so much that it causes storms to form!

Fire-type attacks used by Gigantamax Centiskorch will change to G-Max Centiferno. G-Max Centiferno doesn’t only deal damage to opponents when it hits. It will also cause them to be trapped within a firestorm that will deal continuous damage to them every turn for 4 to 5 turns. The firestorm will also prevent opponents from fleeing or being swapped out! 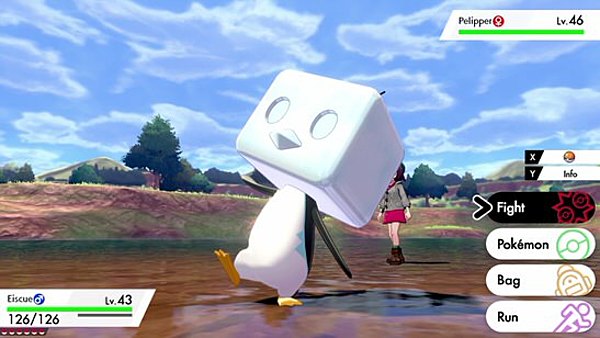 A head covered in ice

Eiscue hails from a very cold area, and it produces cold air from within its head to create ice around it and protect its head from warmth. But this ice isn’t all that tough, and it can be shattered by a strong blow. It seems to go on creating new ice every time this happens.

A drifter just living at its own pace

Eiscue marches to the beat of its own drum, and it doesn’t sweat the small stuff. It’s often seen floating aimlessly in the sea with only its ice-covered head peeking out of the water, and it’s not unusual to find it washed up on distant shores. Even when it arrives in new lands, it doesn’t panic or get upset. It uses its great adaptability to simply carry on living.

Eiscue’s Ice Face Ability is a new Ability introduced in these titles. When Eiscue is in its Ice Face form and has its head covered in ice, this ice will protect it from the damage of a single physical move—but the ice will then be destroyed, changing Eiscue into its Noice Face form. Noice Face Eiscue will turn back into Ice Face Eiscue once hail begins or once Eiscue enters the battlefield when it’s hailing if the Pokémon had been switched out. While Noice Face Eiscue has lost the ice protecting its face—resulting in lower Defense and Sp. Def compared to its Ice Face form—it’s also much lighter on its feet, so its Speed is higher. 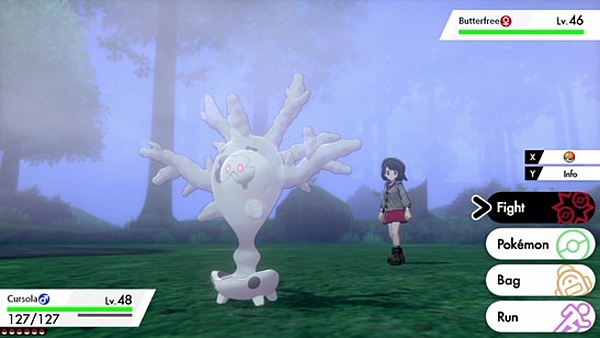 A body overflowing with spirit energy

After continuing to store up the energy it has absorbed from other creatures for so long, Cursola has lost its corporeal body. Its spirit energy overflows and now pours out of its former shell. Perhaps Cursola enjoys the new lightness this form gives it, because it’s sometimes spotted bobbing along as it wanders.

A glimmering light beneath the full moon

Cursola gather on the night of the full moon and fire off their branches toward the sky. There are various theories on why they might do this—ranging from it being a way to release the energy they’ve absorbed from others to it being a form of communication between Cursola—but the true reason is still unknown. Regardless, it is a fantastic and beautiful sight to behold. 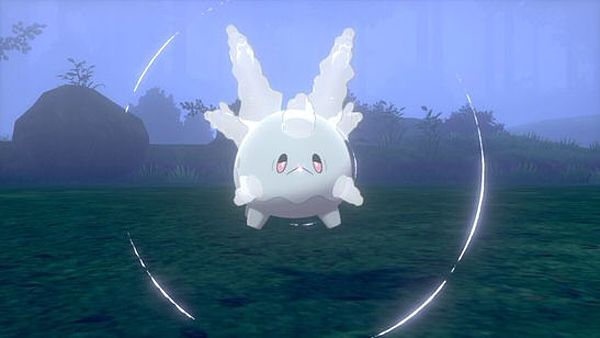 Its form reflects the sea it once lived in

It’s said that this form arose from the Corsola that lived in the sea surrounding the Galar region in the ancient past and that lost their lives due to a meteorite impact in the area. They are often found living in places that were once seabeds, and it’s said that they sometimes attack humans and Pokémon that they come in contact with.

The semitransparent branches that grow from its body are not actually corporeal, and they’re incapable of causing injury or pain. However, if an opponent comes in contact with them, these branches will take root in the victim’s body and absorb its life-force, leaving it unable to move. 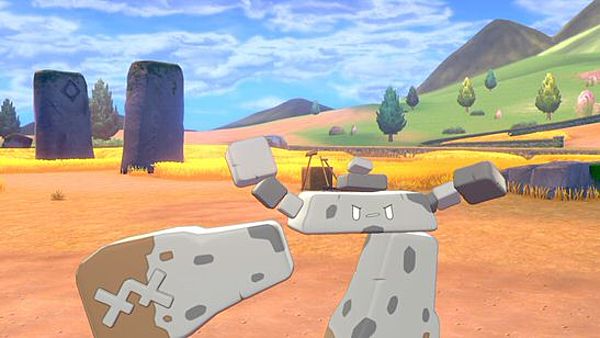 A body constructed of stones and boulders

Stonjourner has a body made of various stones, big and small, and it acts by moving these stones like arms and legs. On occasion, this Pokémon will put on a burst of speed to use its long legs in a dynamic move. But in general, it likes to spend its days standing in a field watching the sun’s progress, enjoying the quiet life.

An annual gathering of grand proportions

In a curious behavioral display, Stonjourner come together from all over on a certain day of each year and stand together, forming an evenly spaced ring. No one has quite figured out why they do this, but there are many competing theories flying about, having to do with the position of the sun, the energy of the earth, and other factors.

Stonjourner has the Ability Power Spot

Stonjourner’s Ability, Power Spot, is a new Ability introduced in these titles. Energy gathers around Stonjourner and powers up the moves of its allies. Make the most of this Ability in Double Battles and Max Raid Battles to support your allies. 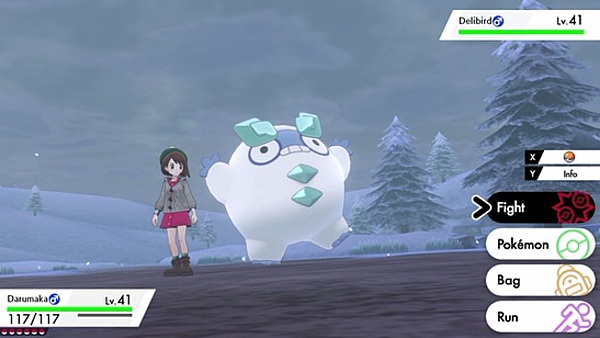 A body adapted to life in the cold

By focusing the energy it holds within its body, Darumaka can expel cold air from its mouth in the form of snow. Galarian Darumaka have been spotted at play with one another, engaging in what looks like a snowball fight using balls made by freezing this snow. 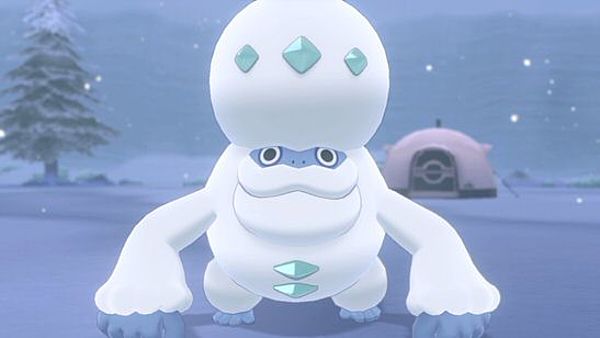 The snowball on its head plays a big role

This Pokémon lives its life with a large ball of snow always upon its head. This snowball serves as a way for it to store food, and Galarian Darmanitan seems to place the food and things it finds into this snowball to keep them preserved. In battle, Darmanitan also freezes this ball over to deliver powerful headbutts. The snowball comes in handy in all sorts of ways.

Its fighting spirit sleeps along with its fire sac

As Galarian Darmanitan adapted to life in the cold, its fire sac became dormant and it developed an organ that produces cold air instead. Darmanitan’s belligerent nature also cooled at the same time, and it’s become quite timid instead—enough so, in fact, that it will pretend to be an inanimate snowman when it senses the presence of humans.

Some Galarian Darmanitan can have the Ability Zen Mode. A Galarian Darmanitan with this Ability will ignite with fury and change form if its HP drops to half or less of its max during battle. Its dormant fire sac, long neglected in the Pokémon’s cold environment, blazes back to life. The usually gentle Darmanitan runs wild, maddened by its fury, and rampages about, spewing fire without any care for its surroundings.

Galarian Darmanitan’s Ability Gorilla Tactics is a new Ability introduced in these titles. If Darmanitan has this Ability, its Attack stat goes up, which increases the physical damage it inflicts on targets. However, it gets so fixated on the first move it uses that it can’t use any of its other moves! 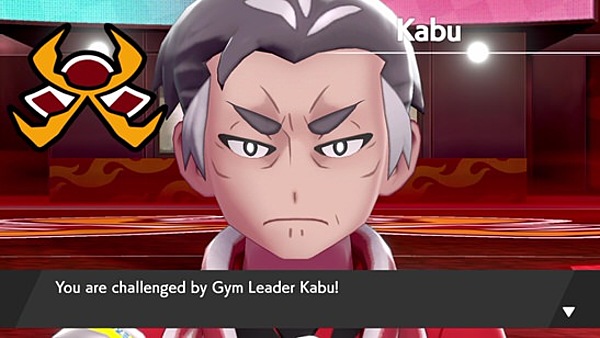 Kabu is the current Gym Leader of a prestigious Pokémon Gym that dates back to the earliest days of the Galar Pokémon League. Although he did lose his seat as Gym Leader once, he gloriously reclaimed it several years ago. This is a Trainer with a wealth of life experience. Kabu has an unrelentingly positive outlook, and he battles with every intention to win together with his Fire-type Pokémon. 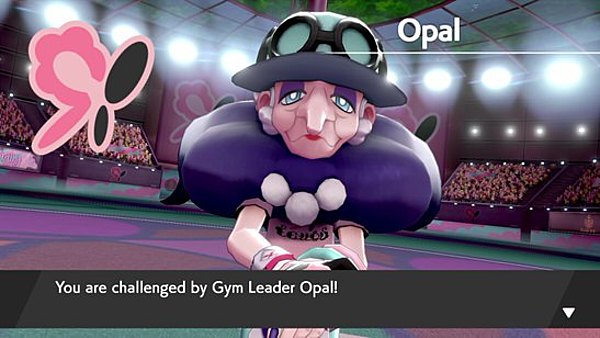 Opal is the oldest Gym Leader in the Galar Pokémon League. Wielding her Fairy-type Pokémon, she has held on to her position for 70 years. She’s sometimes called “the wizard” because of the way that she moves through battles almost as if she can foresee what her opponents will do next. 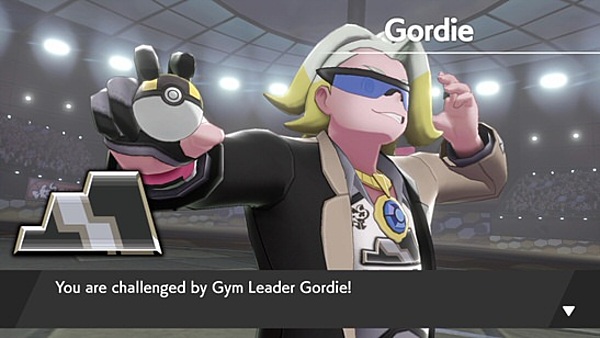 Gordie is the Gym Leader of an up-and-coming Gym that has been gaining great acclaim since it was formed. The momentum of its rise to the majors has garnered it a lot of attention as a real dark horse. Gordie, ever a hard worker, was given the best education possible by his mother, Melony. But his admiration for the Rock type led him to join a different Gym to apprentice at, following his own path to greatness. 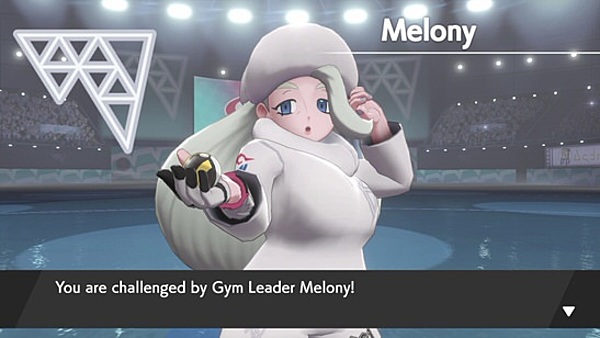 Melony is an Ice-type Pokémon user and the only Gym Leader able to boast that she’s never once lost to Raihan, who is generally regarded as the strongest Gym Leader in the current Galar Pokémon League. She is also the mother of the Rock-type user Gordie. While she has a generous and bighearted nature, she loves hard battles and she hits opponents in their weak spots with unflinching accuracy. 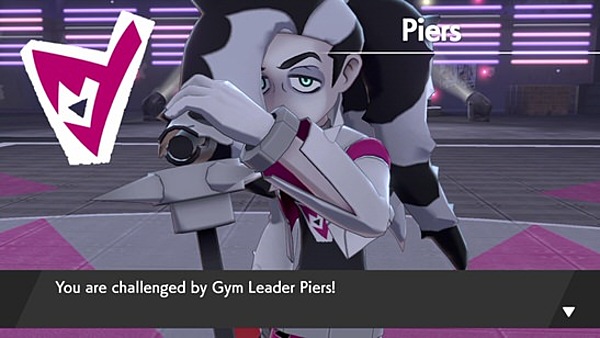 Piers is the Gym Leader of a Gym that was once said to have been among the greats. He may be a bit wild, but he is a Trainer who truly cares for his hometown and his friends. He loves his Gym, with its close ties to the town it’s based in, and he has been trying desperately to support it together with his Dark-type Pokémon. But he also seems to be getting impatient with the limitations of his own strengths.

The appearance of Galarian Darmanitan reminds me of Whisper from Yokai Watch.

The Witcher author has not played the game adaptations
Jan 27, 16:03 by tupin
Atelier Ryza: Ever Darkness & the Secret Hideout hits 350k sold worldwide
Jan 27, 16:01 by sikes primero Jan 27, 15:40 by manazuishou
DOOM Eternal director says the game will not include microtransactions, cosmetics are unlocked through XP
Jan 27, 15:54 by mereel
Sakurai looks back on his first interview with Iwata, and what it was like working alongside him
Jan 27, 15:38 by manazuishou
NPD data reveals the top 20 best-selling games for every year from 1995 to 2019
Jan 27, 15:28 by ridleysaria