Reggie Fils-Aime fondly looks back on the SNES, says he had over 80 games in his collection

I'm going to need a rundown of that collection, Reggie
14 December, 2019 by rawmeatcowboy | Comments: 5 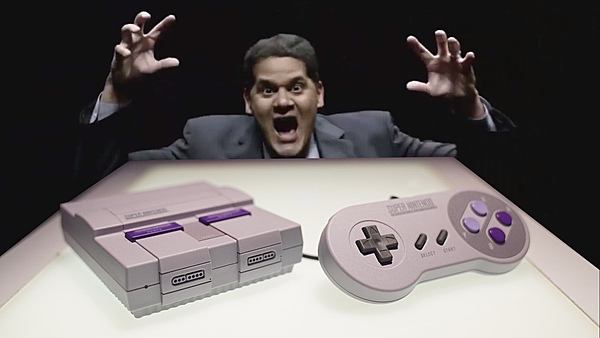 Reggie Fils-Aime was on-hand at The Game Awards 2019, where he took to the stage to give a speech about indie games. Hollywood Reporter managed to snag Reggie for a moment and got him to talk about his first Nintendo platform, which was the SNES. Check out what Reggie had to say about the SNES below.

"My first system was the Super Nintendo, so I played Super Mario World — and ended the game with 99 lives — and The Legend of Zelda: A Link to the Past. I had over 80 games on that system, and I think that helped me with the fans and the company, because I knew the content so well. … For me it's been a part of my growing up. I was with Nintendo of America for 15 years. Now, being able to be like a fan [again] and celebrate this industry is really special."

Sounds like a hell of a collection for a kid, but then you realize Reggie would have been 30 and director of marketing for Pizza Hut when the SNES came out.

I started thinking "Were his parents rich?!" but that makes more sense now.

To be fair he didn't specify what games they were, so they may not all have been good. :P
I had quite the SNES collection myself. Definitely not 80 games, but in the 40-50 range for sure. My parents were far from rich, but my mom would often buy me cheap games if she could afford it. Unfortunately (especially back then) "cheap game" often meant bad game, but I guess she thought to a child no video game can be bad and we'll just play anything we're given.

I don't think I got any more than eight SNES games as a kid. We weren't particularly well off. But I was in a fortunate situation where my mom worked for a video rental store and would frequently rent video games for us, so I got to play a lot more games than the several I owned.

I wonder if he still loves a Link to the Past more than BOTW.