What the Golf? developer sets the record straight on their Game Awards 2019 golf ball stunt

Getting the full story out
14 December, 2019 by rawmeatcowboy | Comments: 7 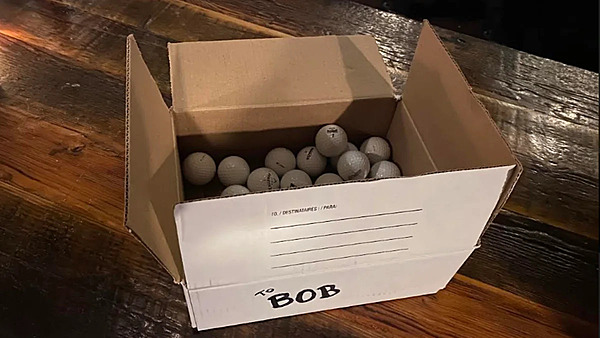 Shortly after the Game Awards 2019 aired, word got out about something the team behind What the Golf? did. Long story short, the developers brought a box of golf balls to the event, and started rolling them down the venue's floor for a little entertainment. This went hand-in-hand with comments from What the Golf? dev Tim Garbos, who stated that he found the Game Awards to be a boring affair.

The news got a few people riled up, and Garbos has been receiving some backlash about the stunt since. Garbos also caught wind of our story on the topic, and wanted a chance to clear the air and set things straight.

I had a short convo with Garbos via email, and you can see his full statement on the matter below. The comments are being shared with his permission, and what you read was pieced together from various tidbits of our convo.

While we might not be fans of the show, we meant no disrespect to the show or the people working there. We also did it in a very subtle low key way far from the stage and any area you could step on a golf ball, and they got picked up again. It all happened during a commercial break. We would never do anything to take attention away from other developers/games.

I honestly don’t think that many noticed at the show, so the story is based on a few people who got a golf ball. It was far from any place people could walk and not at all close to the stage. The whole thing took 1 minute during a commercial break. Made a few people laugh and look around, then it was over and all the balls were safely picked up or rolled safely down to the stop thing at the end. I don’t know where the 100 number came from, that’s a huge overstatement. If you look at the picture of the box, I think you can count 13 balls and I had tilted it so it looked like more.

Classic story growing out of proportions on the internet, but we are of course sorry if it inconvenienced anyone. And we won’t do it again. That said the game awards part of the show is still really boring. It’s more of a reveal show, which is all fine, just not our cup of tea.

We’re sorry if it inconvenienced anyone, but it was done fairly controlled and far from the stage and places people could step on them. It was a little fun thing in the small area we were seated at and no one got hurt.

Thanks to Tim for reaching out to share his side of the story. We appreciation the conversation, and the opportunity to share his follow-up.

Rolling golf balls .... indoors even.
The nerve of these dangerous criminals! Lock them up! Do it for the children!

If they weren't aware of what the show was like beforehand, then whatever. But by the sound of it, they brought the golf balls to entertain themselves BECAUSE they knew they were gonna be bored. If that was the case, why go at all? Why go to something you know you aren't gonna enjoy? That's the part I find disrespectful. Going to the awards just to act like children.

Pretty sure they went because they were nominated for an award. Kind of have to be there to accept the award.

Rolling golf balls .... indoors even.
The nerve of these dangerous criminals! Lock them up! Do it for the children!

I know, I'm surprised there's even backlash, this is ridiculous. The Game Awards are roughly analogous to the VMAs anyway, how dare they cause some completely benign mischief.

After the awards they put their Hell's Angels vests on and rode their Harleys into the sunset.

On the other hand, I started playing their game and it’s pretty phenomenal.

I hope they get the electric chair!