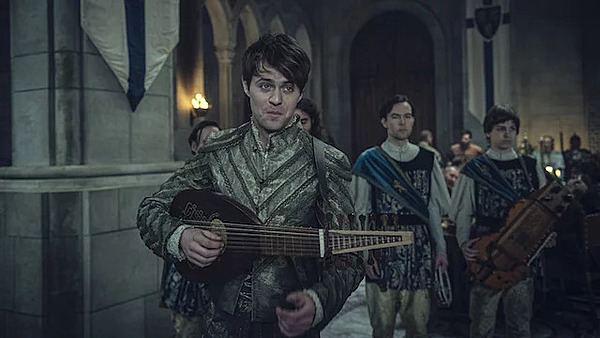 Joey Batey is the man playing Jaskier in Netflix's Witcher series. Game fans better know the character by the name Dandelion, but there are bigger differences between the two adaptations than the name. Comicbook.com talked to Batey get his take on the different portrayals.

"When I first played the games, I loved John Schwab's performance in the games. I think we're very different and I think that's very easy also because he has an American accent. I have a British one, and so, instantly we're worlds apart. We even have different names. So I never at any point felt, like I was going to in any ways tread on his toes. But regarding the costumes, I actually really loved them. I remember ringing Lauren and having a chat about them and the first thing out of her mouth was no codpieces and no tights, and I was like thank the Lord because I'm not spending what could potentially be the next seven years of my life wearing tights.

Again, this is very early on. In the games, he's much older. The games take place, obviously, after the book series. This is Jaskier's sort of origin story. This is the person who he was before he became that authority. These are the sort of rough and ready clothes, and fancy as they are, you can still get the impression that this is a guy who can make it out of a tavern window at the drop of a hat if needed. That was something that I really enjoyed, was the fact that there was some looseness to it. There was a chicness to it, but there was ... this is still a guy who goes on adventures sometimes. It sort of was the best of both worlds for me."