Fortnite is still the game to beat
by rawmeatcowboy
02 January 2020
GoNintendoGN Version 5.0 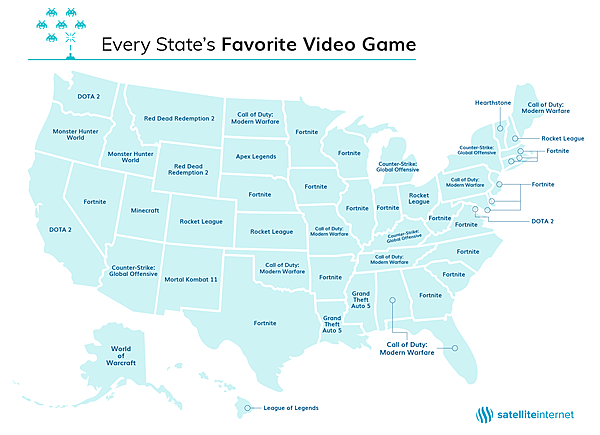 Kids these days are flossing everywhere. And (un)fortunately for dentists, we’re not talking about their teeth.

If you’ve seen the floss dance craze, you might recognize that most folks learned it from Fortnite, which happens to be the most popular video game of 2019.

Gaming is a big deal

Using data from Google Trends, we found that Fortnite ranked as the most popular video game search across 20 states. That makes sense.

According to Business Insider, Fortnite has 250 million players worldwide, which is roughly the same amount as two-thirds of the US population.1 That just goes to show you that gaming is big business. According to GlobalData, the gaming industry is worth hundreds of billions of dollars.2

According to Pew Research, 43% of US adults say they play video games.3 And the Entertainment Software Association reports that 75% of Americans have at least one gamer in the household. It’s safe to say that video games are no longer just a nerdy thing.

Most popular games are affordable and social

And those gamers aren’t just your typical, basement-dwelling trolls either. Scientific studies show that children who play a lot of video games may have better social skills (and fewer peer problems) than their non-gaming peers.5

Statista claims that half of American gamers make less than $30,000 a year. Keeping the price of daily entertainment down is a major draw of video games.6

Given that info, it makes sense that the most popular video games are both affordable and social. Every single game on our ranked list can be played with multiple people online. And most of those favorites are either free or have a relatively low recurring price for entertainment—let’s just say a month of staying in and gaming is far cheaper than a month of drinking in the club and flossing all night.

But Fortnite is not the only game getting some major search love across the nation. And we gotta say, we’re not surprised at our list of every state’s favorite video game of 2019. While there’s a mix of games, we can see those same common themes: they must be affordable and social.

Following behind Fortnite, the second-most searched game was Call of Duty: Modern Warfare, which was the most popular video game in eight states. And while the release date isn’t until October 25, 2019, it’s the sixteenth Call of Duty game, so players know what they’re getting into, and they’re anxious to get it.

The next highest-ranking games, Counter-Strike: Global Offensive and Rocket League, are both tried-and-true favorites in the multiplayer world. Essentially, every state’s favorite games are great ways to get together online without breaking the bank.

Cheers to endless social entertainment on the cheap–and to all the Fortnite fans: floss on!