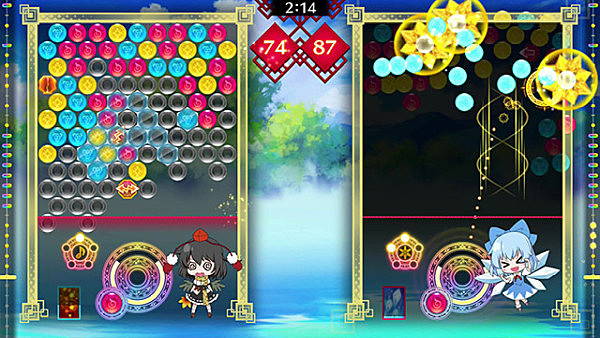 Touhou Spell Bubble is a brand-new rhythm puzzle game based on the Touhou Project series. It adds rhythm game elements to bubble shooting-style puzzles with simple controls, which you can enjoy while listening to Touhou music arrangements.

A large number of popular characters from the Touhou Project series will appear, including Reimu Hakurei (voiced by Ayaka Suwa) and Marisa Kirisame (voiced by Naomi Ohzora).

Well-known Touhou music arrangement artists such as IOSYS and Yuuhei Satellite worked on the soundtrack, which includes popular songs and a large number of new songs.

The Taito sound team Zuntata will also work on the in-game background music and arrangements.

A large number of well-known illustrators worked on the character illustrations, including key visual artist Fuzichoco. And with popular voice actors voicing the characters, the unique characters of Touhou will come to life.

Taito will be releasing Touhou Spell Bubble on Switch in Japan sometime in February 2020. The title will be priced at 5,800 yen. You can check out the official Japanese site for this game here.