Play til your heart's content
18 January, 2020 by rawmeatcowboy | Comments: 0 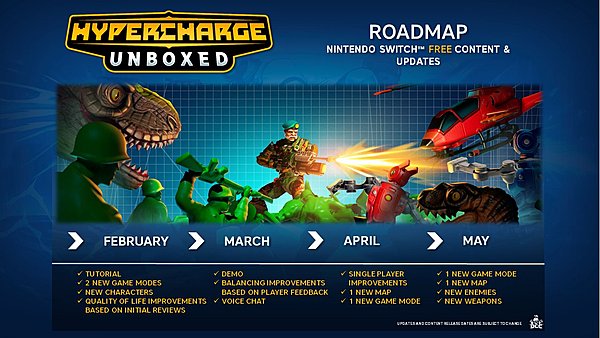 The developers of HYPERCHARGE: Unboxed want to give their game the best leg up on the competition possible. They're already bringing out a game in a genre that is somewhat lacking on Switch, so that's a great start. Building on that, the team has outlined their content plans for the game over the next few months, and new maps, weapons, and more are coming.

The best part of all this content planned for the game is that it won't cost the player a penny. The dev team has confirmed that all updates are going to be free, so you can enjoy the extra content without being nickel and dimed.

Platinum reveals "Project GG," which is targeted for all existing platforms, also teases other projects, including a huge secret
Feb 26, 18:34 by enthropy
Animal Crossing: New Horizons gameplay clips show off character customization
Feb 26, 18:21 by mangothemagician Feb 26, 18:19 by mangothemagician
Fan recreates HAL's infamous logo to celebrate the company's 40th anniversary
Feb 26, 17:52 by ummbelievable
Switch owners in China are not happy with how things have been going since launch
Feb 26, 17:48 by ummbelievable
Classic and modern Mario Bros. styles hit the track in Mario Kart Tour (full tour details)
Feb 26, 17:41 by ummbelievable