Space Hunted: The Lost Levels Coming Exclusively to Wii U on Feb. 13th, 2020 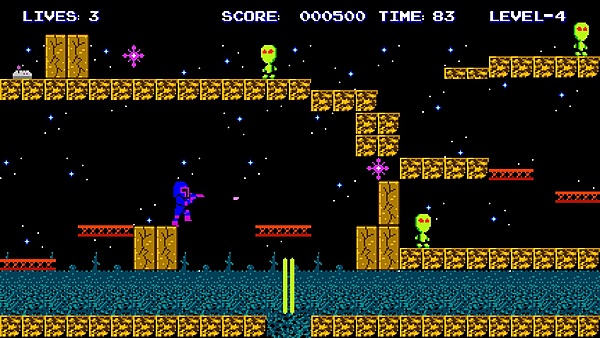 Ultra Dolphin Revolution has announced its next game, “Space Hunted: The Lost Levels” for the Wii U via the Nintendo eShop.

We aren’t done with You, Jade Hunter…

You are Jade Hunter, an intergalactic treasure hunter. While traveling past an uncharted planet, your ship was shot down. Now Jade is an intruder, an alien, on this uncharted planet, and is being hunted down. Your mission is to survive and escape the planet!

This is a more challenging version of Ultra Dolphin Revolution's game Space Hunted. New levels, obstacles, and dangers await! This game is only for those who seek a true challenge!

Do you have what it takes to survive in Space Hunted? Or will you be hunted down?

Space Hunted: The Lost Levels is a retelling of the first Space Hunted. The levels are designed to be drastically more difficult than ever before! Only those seeking a true challenge can complete this game!

Our title will be released next week February 13 th in North America, Europe, and Australia for the price of $3.99/ € 3.59. We’re releasing on the Wii U because we can!

Ultra Dolphin Revolution is an independent game developer primarily focused on Nintendo consoles. We have developed “Shadow Archer” for Wii U and are currently working on “Real Men Use Items!” We’re a proud, independent developer that engages with Nintendo fans and the retro gaming community. Visit us at ultradolphinrevolution.com and our social media pages fb.com/ultradolphinrevolution and twitter.com/UltDolRev

Shovel Knight: Treasure Trove's Version 4.1 update for Wii U in final testing, won't include 1:1 pixel scaling
Mar 29, 06:53 by conangiga
Shantae and the Seven Sirens won't have DLC, details on the Japanese/Asian release being worked on
Mar 29, 06:50 by conangiga
Star Wars: Jedi Knight: Jedi Academy players on Switch are getting dropped into servers with PC players, and it's leading to a bloodbath
Mar 29, 05:06 by mlt-malavida
Check out the European cover art for Burnout Paradise: Remastered
Mar 29, 04:50 by reynard
Nintendo says Dr. Kawashima's polygonal face was inspired by StarFox's Andross
Mar 29, 01:53 by jd
2K clarifies what is/isn't on the game cards for BioShock Infinite: The Complete Edition, XCOM 2 Collection, and Borderlands Legendary Collection
Mar 29, 01:49 by thedreaminghawk