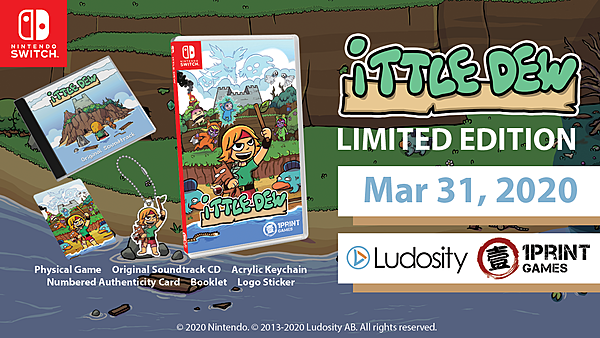 After 6 years, Ittle Dew, a charming and hilarious hand-drawn puzzle game which has captivated the hearts of many players across the world, is finally receiving the physical treatment on Nintendo Switch. 1Print Games and Ludosity have worked closely together to make this Limited Edition a treat for longtime fans and gamers.

"We're over the moon excited to have such a beautiful package of one of our dearest games," says Ludosity CEO Joel Nyström. "It feels like everything has come together with this release - the best version on the best platform with lovingly created extras such as the all new manual and goodies in the box. We couldn't be happier, and working with 1Print Games has been so smooth and easy for us. They have worked fast and hard to make everything we've planned happen."

"It's been a pleasure to work with Ludosity to bring Ittle Dew physically to Nintendo Switch," comments 1Print Games director Iggy. "I hope fans and gamers will enjoy what we have prepared in this limited edition release."

Ittle Dew is now available for pre-order at the 1Print Games website.