Kamiya says he can't do it alone, needs fans to rally together to make Capcom greenlight Viewtiful Joe 3 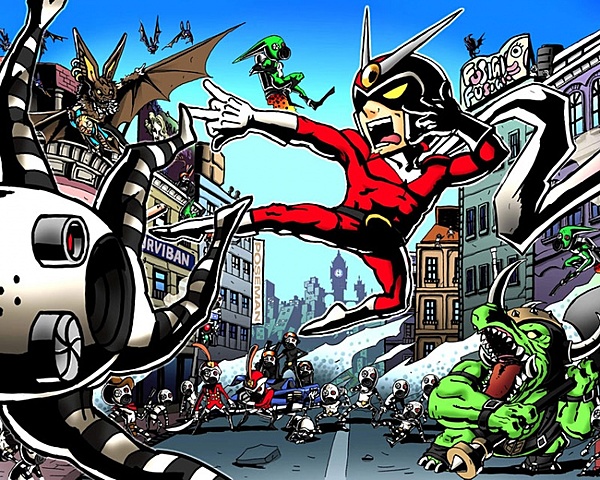 Kamiya has said countless times in recent weeks that he wants to work on Viewtiful Joe 3. He has also said that it can't happen without Capcom's blessing. In an interview with NWR, Kamiya once again said what needs to happen in order to bring that sequel to fruition. It looks like Kamiya is really turning to the fans to help make his dream a reality.

(These comments come from Kamiya, but were interpreted by a translator) He said maybe if enough people actually reach out to them and propose it, it might happen. He alone cannot do it. So, if you guys rally people up and get them together he would love to do it.

Seems like it's time for someone to get the ball rolling on a campaign. A catchy hashtag, a movement on social media, and email campaign, and so on. Anyone care to take up the mantle?!

It would be impressive if we got Scalebound, Viewtiful Joe 3, AND Okami 2 to happen all at once

What does Capcom have to loose with greenlighting this? Serious question here.

Been paying VJ these days, and it's a damn fine game on so many levels. Can be retty difficult at times, but great when you "crack the code" =)

And as I agree with Ben! VJ3 and Scalebound AND Okami 2? Oh gaws..

Didn't we already have Viewtiful Joe 3? I mean, what about that DS game? (which I keep forgetting I actually own)

There were actually two games after VJ2, Red Hot Rumble (PSP) and Double Trouble! (DS). However, both are classed as spinoffs, so they don't count as VJ3. And if you think that's confusing, take a quick look at the Kingdom Hearts "spinoffs"...

Propbably as good as time as any. Capcom still is a weirdo but at least they are in the habit of releasing a lot of old gems for easy cash right now. If we can at least get a VJ HD duology we may see a third game if it does well.

Maybe if he didn't block so many fans, he might get more support…

The Kickstarter for Wonderful 101 on Switch literally included a backer reward of getting blocked by Kamiya. I simultaneously think that it's going to bite him in the @$$ one day and that he isn't going to change anytime soon.

The kickstarter also included a stretch goal of Kamiya unblocking everybody.

Hm. So it did. I stand corrected. Still odd that it had to be a stretch goal when it could've just... happened.

I'm pretty sure at this point the whole blocking thing is just a running gag/meme to Kamiya. Like first he blocked because he was legit sick of people bothering him over stuff he has no control over (like I remember how annoyed he got at people complaining about Bayo 2 being Nintendo exclusive despite repeatedly saying "Bayo 2 wouldn't even exist if it wasn't for Nintendo so either be glad it's happening to begin with or shut the hell up"), then it became such a well known thing about him he decided to turn it into a joke.