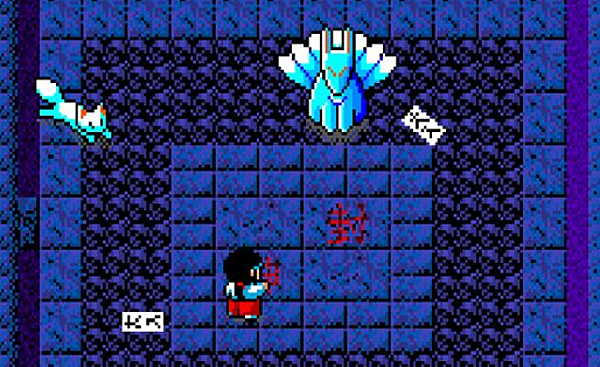 Here's where things get really interesting. Kiki Kaikai was never officially released in the West. There was a limited bootleg release of the game, which was titled Knight Boy. It's pretty much the same game as Kiki Kaikai, but with palette-swapped title screen. The title screen said the game was licensed by Taito, but that's not the truth!

How Hamster managed to include Knight Boy in Arcade Archives: Kiki Kaikai is beyond me, but it's certainly a neat part of history!

I'd never heard of Knight Boy before reading this. I always assumed Pocky & Rocky was the only westernized version of the original game.

Yeah things got weird, didn't it?

There apparently was five games in the series. Kiki Kai Kai was the original Japanese-exclusive arcade version released in 1986 that finally sees its first US release today on March 12, 2020. Apparently back in the 1980's, a bootleg version of the game was called Knight Boy which now is officially released with Kiki Kai Kai today.

The first game would be ported to the Famicom, but like the arcade original, the Famicom verison never saw international release. Every game since from SNES until the GBA would have releases in Japan and America until the GBA version bombed worldwide ending the series.

debunked. it's just the rare EN version with a subtitle on it, nothing more

debunked. it's just the rare EN version with a subtitle on it, nothing more

Nope. Several places say Knight Boy was a bootleg that wasn't licensed by Taito for America until now with the official release of Kiki Kai Kai in the US today.

it is true that Knight Boy was a bootleg, completely unlicensed title screen hack.

however, Knight Boy is not in the Arcade Archives release. as said above, the 'Western' version included is just a version with a subtitle under the game's logo. AFAIK it's not preserved in MAME which is probably what caused the confusion- Hamster's release info just says the Western version, and Knight Boy is the closest to that in MAME. here's what the Western version here looks like:
https://twitter.com/SarahSSowertty/status/1238110722124648449

People I know who bought the game have confirmed it's just the subtitled version in the game as the EN version. The article is totally wrong and Knight Boy is nowhere to be seen.

Oh, you are right:
https://www.youtube.com/watch?v=7odRNEnZqgY

This live-streamed video is from the PS4 version four years ago.