That wraps up the first full week of GoNintendo Thoughts! Man, it's been so much fun to put these pieces together again. Today's Thought is one that is very near and dear to my heart. Hopefully you feel the same way too! 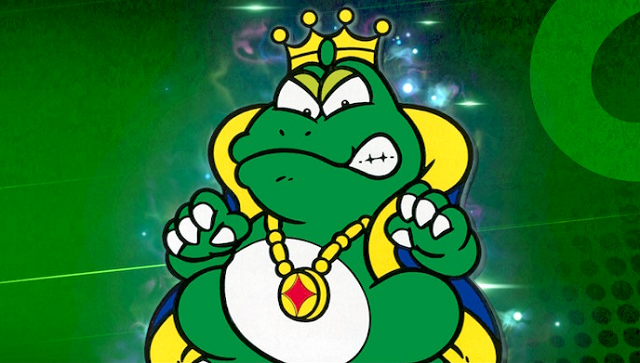 Nintendo is extremely well known for their intellectual properties. The Big N has a ton of high-profile and noteworthy franchises under their belt, and each one is filled to the brim with memorable characters. More often than not, we see those characters get utilized time and time again. Characters might make cameos in other mainline games, sports spin-offs, party titles, and more. It's always nice to see characters get to shine outside of the games they usually appear in.

Now to be fair, not every character in every Nintendo game is going to make sense for a cameo. You're not going to have Bongo Bongo from Zelda or Kracko from Kirby appear as a playable character in the next Nintendo sports title. The best you can hope for is a nod to characters like that in the Smash Bros. series, or as a one-off reference in their respective series' down the line. I understand that Nintendo can't, and shouldn't use every single character in multiple games.

With all that said, for the life of me, I cannot figure out why Wart has been so neglected. The character seems absolutely perfect for a playable character slot in any number of Mario spin-off games! There have been a handful of characters who appeared in spin-off games and series' that could be easily taken out and be replaced with Wart. I mean, do we really need baby versions of characters in Mario Kart? For that matter, do we really need Metal Mario or Pink Gold Peach?! Surely Wart would be welcome over those throwaway variants.

As far as I can tell, Wart has only ever really appeared in two games. He was originally from Doki Doki Panic and also appeared in The Legend of Zelda: Link's Awakening. Every other appearance from Wart was just duplicating a role he already filled. He was kept in for Super Mario Bros. 2, retained for the Super Mario Bros. 2 remake, and stuck around for the remake of The Legend of Zelda: Link's Awakening. Outside of that, Wart has been relegated to a Spirit in Smash Bros., and a quick pair of references in the Paper Mario series.

How in the world did Wart get left behind in Super Mario Bros. 2 when so many of his compatriots have been a part of the Mario series ever since?! Shy Guys have appeared in numerous games, Birdo has been all over the place, Ninji have had their fair share of appearances, Bob-ombs made the cut plenty of times...and the list just goes on and on. How in the hell did Wart, the BOSS of Super Mario Bros. 2, end up being left in the dust?!

You certainly can't use the 'dream' excuse, as I've already showcased numerous Super Mario Bros. 2 characters that somehow escaped Subcon and made it into the regular world of the Mushroom Kingdom. The funny thing is, when Wart appears/is mentioned in other games, it always has something to do with dreams. In Link's Awakening, (SPOILER) the whole game is a dream. In the Paper Mario: Color Splash reference, a Toad talks about seeing Wart in a dream. That only leaves the Super Paper Mario reference, where "Cyborg Wart" is name-dropped. This may or may not be a reference to Wart, but it doesn't matter, as it's mentioned as a comic book series. In other words, Wart can't even be treated as real in the video games he's referenced!

I guess the only argument that can be barely used is that bosses from Super Mario Bros. 2 haven't gotten much love at all. Birdo is really the outlier in the group. Mouser, Tryclyde, Fryguy, Clawgrip, and Wart have all been neglected over the years. I have no idea what made Birdo so special out of that group, but they've appeared in countless games over the years. Did all the bosses in Super Mario Bros. 2 draw straws to see who could move on to other games, and Birdo ended up the winner?!

Everytime I think about how Wart has been held back by Nintendo, I get fired up. There are so many opportunities to use him in both the mainline Mario series and spin-off games. Obviously the sports and party game cameos would be super easy, as no explanation is needed for including him. When it comes to Mario games, there's still plenty you could do. Can't we have Wart and Bowser coming together to squash Mario? Perhaps Bowser and Wart kidnap Peach and Daisy respectively? Maybe Wart could come up with another 'dream' plan to take out Mario and the gang for good this time!

Even if Nintendo is sticking to the idea that Wart is nothing but a dream, there's still ways to work him out. It's not like we need detailed story explanations to make things work in Mario games. Who the hell knows where Bowser Jr. came from?! Same thing goes for the Koopa Kids! They just showed up one day and that was that. Wart could randomly show up again as well, but if there absolutely has to be an explanation, I'm sure someone in the Mushroom Kingdom could create a machine that makes dreams a reality. I just refuse to believe that Wart has to live in the dream world forever.

Am I seriously this passionate about Wart? While I'm not ready to knock down Nintendo's front door with a pitchfork in hand, I am pretty disappointed to see how little the character has been used over the years. I always liked his design, and I thought he'd be a great way to spice up a traditional Mario game from time to time. I think it's nice not knowing what boss will be in a Zelda game when you play it. Most of the time it's Ganon, but that's not always the case! I don't see why it can't be the same for the Mario series.

Nintendo, please...just give Wart something to do. While I'd love to see him have a grand return in a proper Mario game, I'll take anything better than passing references. There has to be a sports game coming up where you can toss him in. I don't even care if he's just a referee or something minor. Just give him something to do, and let fans know that he's not a figment of their imaginations! Stop making variants to fill roster spots in franchises and give those games some old, new blood! There's no doubt Wart is raring and ready to go.

If Birdo and Shy Guys can exist then so can Wart.

I think Birdo was reintroduced in Mario Tennis games because the developers needed paired characters for doubles: Mario would go with Luigi, Wario with Waluigi, Peach with Daisy, and Yoshi with… Birdo.
That was the reason for his appearance in these games.
I guess the developers didn’t find any similar design-based reason to reintroduce Wart.

Birdo was reintroduced in Super Mario RPG. You fight her in the kingdom on the clouds (Forgot the name of it). And Birdo is hatched during the fight. Shy guys and bomb-ombs also appeared in SMRPG and I also think they made reappearances on Yoshi's Island. If memory don't fail me Bomb-omb's may have appeared in Super Mario World as well

Yes, you’re right about Super Mario RPG. I played it and loved it.
I don’t know. I’d say it was another time. Now they are more restrictive but Birdo got "bigger" because of how many new Mario Tennis games we got. Bob-omb is still there because I think they needed a bomb character in Mario and they thought it fits well with Mario gameplay. As for Shy Guy, I’m not sure, but I think his character design is so unique and had so much potential to be iconic that they just had to reuse it. Since Yoshi’s Island, je became a staple of Yoshi games.

The whole thing with the Shy Guys is weird. My theory (which I just pulled from under my sleeve) is that maybe because Shy Guys where so prominent during Yoshi's Island they may have been stuck on Mario and Luigi's mind. That would explain why Luigi is so frightened of Shy Guy's face (and why he's such a coward. Being kidnapped is a traumatic experience). And because Mario was aventuring with Yoshi he turned out more adventurous. Has for Birdo appearing in SMRPG, maybe Subcon is a dream realm thats interconnected and Birdo dream about that realm before being hatch.

I want those adorable tree dudes from Mario Galaxy 2 back. They're the best!

I love Doki Doki Panic/SMB2. It really is a shame that Nintendo never made a sequel. I guess I can understand sticking to the more popular SMB gameplay, but it really is baffling Wart doesn't at least show up in stuff like Mario Kart.

im Surprised that nobody ever asked Nintendo to localized Doki Doki Panic. The could do and updated port of Super "Mario Bros 2" and make the Doki Doki Characters unlock able and then they can make a sequel where they make these characters scape Subcon explaining why they are appearing on Sport and kart games (Not that Nintendo would care about that explanation).

There is a frog enemy in Super Mario 3D World. First time I saw it, I could swear it was Wart. Too bad it wasn't