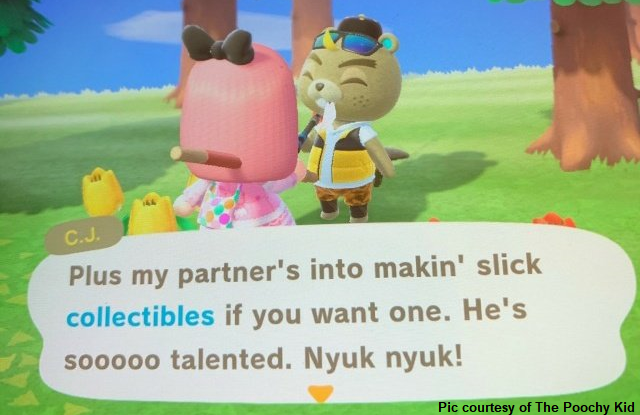 Animal Crossing: New Horizons has a lot of firsts for the franchise, including things like terraforming. Something else has been discovered in New Horizons that if true, would be a first for the series, and a first for Nintendo as well.

As you can see above, C.J. can be seen having a conversation about his partner, Flick. Some may think this could mean business partner, and there's certainly wiggle room for that. Others believe it to be a reference to a romantic partner, which could be true as well. In the case of romantic partner, this is actually just one reference to same-sex partners in the game. If this is indeed a nod to same-sex relationships, as far as we know, it would mark the first occasion where there's an openly gay character in a first party title.

While the discussion rages on, fans continue to look for more evidence to sway the conversation in one direction or the other. Below you can see some backstory on C.J. and Flick, which shows they've certainly known each other for a long time.

I want to stress that we honestly don't know what the correct interpretation is, or if there is one. We have reached out to Nintendo for comment on the matter, but I would imagine it's very unlikely they'll give a clear-cut answer, if they even respond at all. If they do offer up a comment, we'll be sure to share.

I just assumed him and Flick had a business together.

I'm wondering what the situation is, as it seems like there'd be no reason to have the word different in Japan and North America. There's certainly wiggle room, but I doubt we'll get a definite answer from Nintendo one way or another.

There's plenty of text that is different between both versions. Some characters are different gender even and the "body type" that you can choose was specifically labelled as "boy" and "girl" in japanese too.
I'd say it is a stretch, but who knows considering the liberties in localization that NoA is taking.

Yeah, I think Nintendo purposefully goes a bit ambiguous so people can read into some situations. I'm honestly not sure what the "correct" answer is here. I've reached out to Nintendo for comment, but I doubt they'll confirm/deny, and most likely will give another ambiguous statement, if they even comment at all.

True. Either way, I feel that the main strength of the game is that these situations can be interpreted however you desire, leaving some space to imagination. That way, no one is really excluded.

I hope it's true. If any game can help break down old fashioned social barriers in a simple but refreshing way Animal Crossing is a great start.

Because any game where you create or assume a character, it can be a gay character. Not a Nintendo game but my character is Stardew is hella gay and therefore so are few of the Male NPCs.

Everyone assumed/wanted to believe that Flick was gay from the get go from what I've seen, so I think people are just reading into this.

Not that it would really matter as even confirmed couples like Cyrus and Resse don't really refer to the fact that they are couples that much anyways. But yeah it just means "bussiness partner."

"If this is indeed a nod to same-sex relationships, as far as we know, it would mark the first occasion where there's an openly gay character in a first party title."

That is not true at all because there was openly gay characters in Fire Emblem, as well as having the option to have same sex characters in relationships.

I know that there are characters you can choose as same-sex partners in Fire Emblem, but can you point me to the characters who were openly gay from the start? I'm not as well versed in Fire Emblem, and I did do research before posting, but I could be wrong.

I also know some people are making the argument that Animal Crossing is a fully first-party affair, while Nintendo works with Intelligent Systems on the Fire Emblem series. I think that's splitting hairs a bit too finely for my taste, but I still felt it was worth mentioning.

Maybe I'm ignorant to development changes at Nintendo, but wasn't this developed in Japan, and translated into English? I'd say if the Japanese version uses "friend," that would be closer to the original intent for the character. Maybe US localization added the word for ambiguity and to please those who are looking for this kind of thing.

It’s also worth noting that these references are absent in the Japanese version. So, to me, it looks like some fans are reading into this and believing what they want to believe.

Seeing this made me so happy. It's nice to not feel ignored.

Do you want to become Buzzfeed? 'cause that's how you turn into buzzfeed.

Who cares ?
If you care you either should probably do something else with your time if you're one of those who wants it to be true, because making a big fuss about it is exactly what is going to create extreme reactions against it while not making a fuss about it is what is going to make consciences eveolve in the right direction. On the other hand, if you care because you think it's outrageous and left-wing bs or whatnot, then you should probably go back to the last century.

Social change is a process. We're still in the hump where it's news-worthy when something like this happens, but eventually it will be like 'who cares?'. Just gotta wait it out...

Nintendo restructuring their Brand Ambassador Program
May 29, 12:01 by ben_goldentriforce May 29, 04:05 by tlk777 May 29, 03:56 by sanderevers
PR - PQube teases new IP and announces 95% short-time discount to celebrate first Kotodama anniversary
May 29, 09:49 by conangiga
GoNintendo Video Feature - We played Clubhouse Games: 51 Worldwide Classics with Nintendo's Treehouse!
May 29, 07:25 by autumnalblake
Amazon France adds four placeholder listings for Nintendo titles
May 29, 06:00 by seansneachta