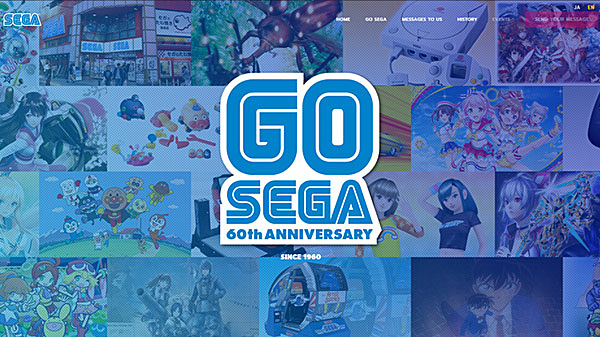 SEGA has opened an official Japanese website to celebrate their 60th anniversary, complete with a new "GO SEGA" slogan. There's also a special message from

SEGA chairman Haruki Satomi, which you can find below.

This year, sixty years will have passed since Nihon Goraku Bussan Co. Ltd., the predecessor of Sega, was established on June 3, 1960. We are indebted to everyone who has patronized the Sega Group for many years, and would like to express our deep gratitude to all of you.

That is why we must overcome all obstacles and keep taking on new challenges.

The key message of the 60th anniversary, “GO SEGA,” expresses such aspirations.

The Sga Group is planning a variety of special contents for this 60th anniversary. Through these special contents, we will deliver the passion of the Sega Group to the entire world.

SEGA has also opened a sub-website for SEGA Shiro, a new character SEGA will be using to celebrate their 30th anniversary. SEGA Shiro is played by Maito Fujioka, the eldest son of Hiroshi Fujioka, who portrayed character Segata Sanshiro to advertise Sega Saturn in Japan. SEGA Shiro's debut video is above, and comes with the following message.

“The story of a mysterious young man named Sega Shiro suddenly appears for Sega’s 60th anniversary. Just who is this man who keeps saying ‘Sega-dayo!’? And what about the judo uniform he wears over his shoulders?”

I mean why is this so hard for everyone to realize that SEGA is practically dead? They can't seem to produce quality even when making less games, they refuse to make full use of Atlus even after deciding to publish THEIR games, and on top of that, their Sonic Team staff are some of the most mediocre game developers there are.

Nah, Sega has been dead for well over fifteen years.

The best SEGA-owned IP games of the last few years (and most promising upcoming ones) have been made by other developers:
- Wonder Boy III Remastered (dotEmu)
- Streets of Rage 4 (dotEmu)
- Sonic Mania (Christian Whitehead and Headcannon)
- Panzer Dragoon Remake (MegaPixel)
- Bayonetta 2 & 3 (PlatinumGames)

I'll at least give SEGA credit for letting other studios take over their languishing franchises.