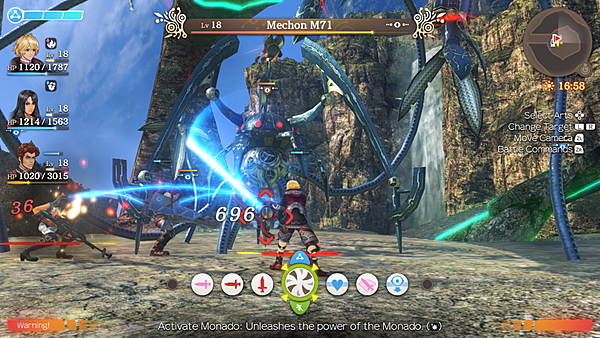 Xenoblade Chronicles: Definitive Edition doesn't come out until May 29th, 2020, but you can preload the game starting today if you'd like. The game is priced at the usual $60, and you'll need 13.7 GB of space in order to download. You can also check out some new footage from the Japanese version below.

That 13GB better include the original soundtrack.

The remixes are NOT an improvement. That operatic voice in Engage the Enemy is horribly misplaced, it completely blows the emotion of the original and makes it sound like a cheesy melodrama! The original soundtrack was perfect.

Remixing the score to the only game I've ever bought a CD soundtrack for just killed my enthusiasm for this edition stone dead.

I agree that those vocals were not great....

...however, the original soundtrack was MIDI and really needed to be orchestrated so if they are rerecording the original songs with real instruments that would be worth it. Like Gaur Plain sounds so much better, (Even if the (original) Engage the Enemy was always a much better song)

What? There were plenty of orchestrated tracks.

They recorded a set live: https://xenoblade.fandom.com/wiki/Live_Recording

But I believe all the in game songs were MIDI, I can't find any evidence of orchestration for them, and up until recently it wasn't that odd for games to still use MIDI soundtracks. Its definitely not close to as bad as DQ, they are really good MIDI choices, but they are still MIDI, and these new recording of Gaur still sounds better.

There are plenty of live instruments in the original soundtrack but I think a lot of the tracks with them had synths mixed in. If you mean fully orchestrated then yeah, I don't think many of the tracks were.

Yeah there were some cases of live instruments, but this case is definitely full orchestration. Its absolutely not just remix the original soundtrack.

I couldn't disagree more. The vocals in the new arrangements for Engage the Enemy was probably the best part. It was so freaking good! In fact, the new orchestrated soundtrack sounds divine, especially the new track for the Future Connections epilogue. I personally feel that you and Ben are far too harsh. Your nostolgia glasses are clouding from enjoying the orchestrated music. I'm a MASSIVE Xenoblade Chronicles fanboy. It's literally part of my username. But I really do think people are stuck in the past and aren't giving this remake a fair shake.

Perhaps once it releases you'll feel differently about the orchestrated soundtrack, but I find it odd how critical you both are.

If anything I toned down my reaction to this to stay within GN's rules. This new version of Engage the Enemy has had the emotional tonality completely gutted by the tacky, ridiculously out of place use of operatic vocals.

There are no nostalgia goggles involved, music is and always has been one of the most important things in the world to me, my father is a professional jazz musician and I've been brought up surrounded by music. I am usually the first person to champion live orchestrations, but and in my opinion, the orchestra sounds too small and there are things in this new arrangement that are vastly inferior to the original. In fact I just gave my old man a listen to the original Engage the Enemy and then Trailer and he, an incredibly knowledgeable 81 year old musician with no nostalgic ties to the game or the score, also agrees that the new vocals sound jarringly out of place and only detract from the composition.

Xenoblade is my second favourite RPG of all time, you could go as far as calling me a fanboy as well considering I own the full four disc soundtrack. I could just as easily counter argue that you're letting your self-confessed fanboyism blinker you to criticism. There's a reason why the FF10 remastered ports all included the original soundtrack as an option and it's not just 'muh nostalgia'. Arrangements can go wrong, they can be inconsistent, they can be good but still inferior or even miss the mark entirely, and yes, they will hit everyone's ears differently. In the case of Xenoblade, this is possibly the biggest disappointment I have felt in a long, long time.

Kinda with you on this one. It didn't kill my enthusiasm, but I was thinking the same about the soundtrack: Why mess with perfection? The remixes just seem unnecessary, IMO. They're not totally bad (well, maybe that voice for Engage the Enemy is), just unnecessary.

What in the hell is everyone talking about?
The original sounds EXACTLY like the remixed one. Just listen to it again. After the first loop the vocals kick in and they simply used that part in the new trailer.