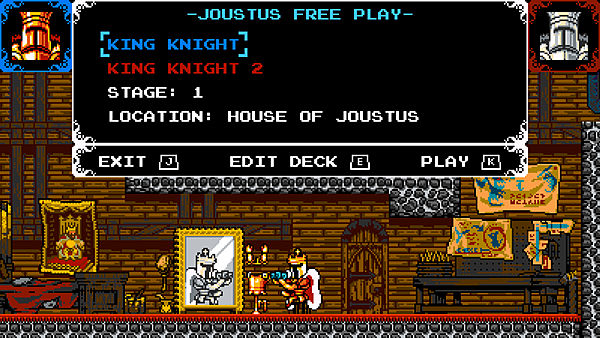 It's the end of an era, my friends. Shovel Knight: Treasure Trove has been updated to Version 4.1 on Switch, and this will be the final update for the game. There's a long list of changes, fixes, and more, which you can read in full below.

New! 1:1 Pixel Scaling mode is now available on certain platforms. It can be found within Options > Screen Scale.

[Switch, Wii U, 3DS] Change: If wearing an amiibo costume when speaking with Madame Meeber the dialogue prompt to change back to the default costume now begins on the “No” prompt choice.

[3DS] Fix: Under certain circumstances, progress would not save to cartridge versions of the game after having updated to version 4.0A.

Fix: Booming Horn while in upward moving wind would cause unintentional movement.

Fix: Co-op: Player A dying when blocking Player B on a ladder would cause Player B to be unable to climb in that direction until Player A returned.

[Sony/PS4/Xbox/PC] Fix: Cameo songs from other games would not be indicated as played within Bard’s Song Menu.

[Switch/3DS/Wii U] Fix: Crash would occur when using the Shadow Mirror to Shovel Drop onto a platter.

Fix: Quickly skipping Troupple King introduction scene after watching his dance for the first time would cause Troupple King to incessantly flap his fins.

Fix: Throwing Sickle would not travel a shorter distance when thrown while Chronos Coin was active.

Fix: Crash could occur if Hoppicles was pushed onto Big Bohto

New! Added dialogue line after defeating Blazorb in Cavern of Joustus to help players know there is a larger mystery afoot!

New! In New Game+, gold multiplier info has been added to the level map menu.

Change: When stealing back a previously lost, non-infinite, non-unique card after a Joustus victory, an entry for that card will always be removed from Chester’s Reclaim list. Previously, if the opponent had a copy of that card in their deck, then stealing the copy would cause your stolen card to remain within the store.

Change: Blazorb is no longer required for 100% Joustus opponent victory.

Fix: King Knight not responding to spikes if he was bashing while wind was pushing downward.

Fix: Playing the Joustus tutorial no longer has an effect on Joustus stats.

Fix: Could avoid damage from Crowndalier by bashing it while it is falling directly overhead.

Fix: Mr. Hat could be pushed out of the arena if damaged during certain attack states.

Fix: Treasure Knight would sometimes aim away from center screen when performing Anchor Shot Zip Slam near edge of the arena, which could result in becoming stuck.

Fix: Final boss first phase could be cleared with certain timing which resulted in the second phase starting with the player player taking damage immediately.

Fix: Beginning a roll from bash will reset the attack hold timer, even if the Attack action is bound to two seperate buttons.

Fix: Turncoat roll could send the player through a collision ceiling when jumping.

Fix: Turncoat roll could travel higher than intended when activated during jump rise.

Fix: Turncoat and Healing Hammer would buffer and execute twice when used just before touching a spring.

Fix: Using Bubble Frog and making contact with lava wall would cause King Knight to recover as if he was wearing the Rodent Regalia. Recovery now resembles a normal get hit.

Fix: Using Searing Saber and landing on a spring, then Gyro Boots just before bouncing on a spring could result in unintentional visual effects.

Fix: Gyro Boots ending in the air could result in the player not being able to visually turn around until beginning another state.

Fix: Airship Joustus battles without a chair could become stuck if triggered too quickly.

[3DS/WiiU] Fix: Decrees would display a gold cost to activate on the second screen when playing in New Game+.

Fix: Can no longer miss 1 turn to win card rewards

Fix: Using the Joustus Cheat Card “Play-Em-All” on the turn before Black Knight activates Meteor Attack would cause the meteor attack to never occur.

Fix: Wealth Whirl vortex could behave oddly in rare cases in stages which have warp walls.

Fix: Money Bags would appear incorrectly when traveling through a warp wall.

Fix: Landing and running off the W2’s bonus platform using cheats could cause non-progression.

Fix: Always Ice Cheat would cause a non-progression with first Specter Knight battle.

Fix: King Knight’s next jump would become unintentionally floaty after rolling once with Turncoat.
Fix: King Knight endless spin bounce cheat could cause cinematics not to progress under certain circumstances.
Fix: New Game+ Heirlooms would have no cost when battling with Propeller Knight.
Fix: Teethalon Rope now doesn’t appear when visiting the area again.
Fix: Joustus Deck Counts fixed for cards that had their side reversed
Fix: Multiple issues addressed for staying in airship invasion scene.

New! Added a special command to access gauntlet target mode! Once all characters are unlocked, begin a target battle while holding “Left Parry and Special” when the VS screen disappears (image). You will know the cheat was successful when you see CHARACTER on the HUD in place of HIGH SCORE.

Change: When Theme Shuffle is on, Target Mode has the possibility of playing a wider variety of music.

Fix: Targets combo meter could remain stuck at 1.0 for the entire round on first play.

Specter Knight: Fix for unintentional height gain when trying to throw a second sickle after wall jumping into collision.

Specter Knight: Wall climb back flip and scythe slash have a heavier fall, to better scale with the increased climb height in Showdown.

Mole Knight: Now breaks dirt blocks below when exiting from a submerged digpile.

Propeller Knight: Now limited to 3 uses of headwind in the air.

Propeller Knight: Holding down Attack button while releasing Special would unintentionally cause Headwind state to continue.

The Enchantress: Fixed issue where Enchantress could pass through the Airship in armor outpost with Dark Strafe.

The Enchantress: Being far above the HUD causes horizontal/upward Dark Strafes to fizzle out, and results in lesser kickback when shooting Magic Shot downward.

The Enchantress: Minor animation jitter fixes when using flight and Magic Shot on the ground.

Reize: Boomerang Throw downward will no longer be destroyed when thrown from above the screen top

Dark Reize: Aerial Dark Boomerang Throw will no longer be destroyed when thrown from above the screen top.

Liquid Samurai: Now limited to 3 uses of Claw Spin before needing to touch the ground.

Liquid Samurai: Fixed facing away from a wall, beginning claw spin, then coming into contact with wall would cause you to bounce towards the wall.

Liquid Samurai: Fixed arrow shot not ending in the air if pushed off ledge during sword weapon transformation.

Wow! Huge text. Is this an update ir a doctoral thesis? Seriously now, Shovel Knight is one of the best games around, I'm glad I have it on 3DS, WiiU and Switch. Here's hoping for Super Shovel Knight in the future.