Star Wars: Jedi Knight: Jedi Academy players on Switch are getting dropped into servers with PC players, and it's leading to a bloodbath 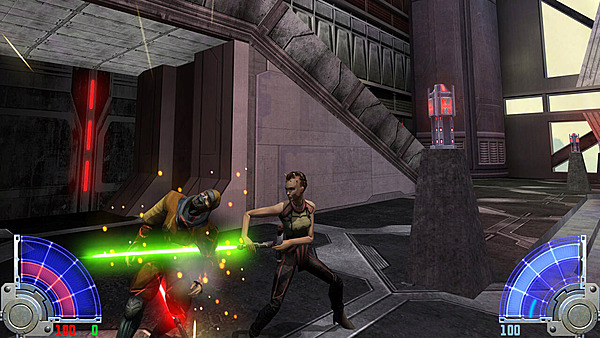 Star Wars: Jedi Knight: Jedi Academy just hit the Switch a couple of days ago, and plenty of people are grabbing the game to hop online and relive some of their earlier multiplayer gaming days. I happen to be one of those people! I also happened to get my ass handed to me online, and now I know why.

While players on Switch can't specify which servers they want to join, players on PC can. That means anyone playing on PC can connect to Switch servers and absolutely dominate. We're talking about people who have been playing Star Wars: Jedi Knight: Jedi Academy on PC for years now, and they're dropping into Switch games and wiping the floor with everyone. Even if you're an experienced player, you're still going up against someone with keyboard and mouse support, which is definitely the way this game was intended to be played.

Furthermore, people playing on PC are able to use cheats and hacks to get yet another leg up on the Switch competition. I honestly doubt that anything is going to be done about this, but I hope I'm wrong. Consider this a word of warning for anyone who was planning to get this game on Switch for the multiplayer. You'll be in for a very tough fight!