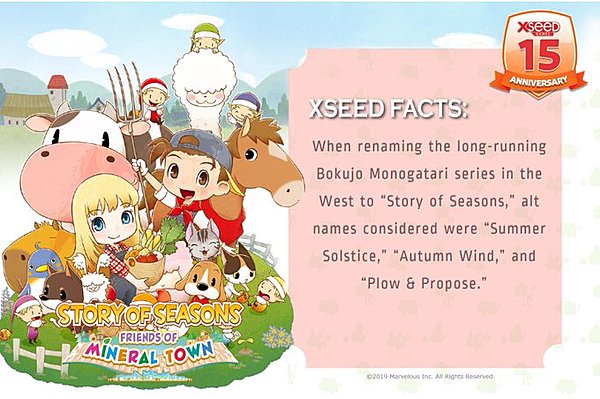 The Harvest Moon series eventually was renamed by XSEED to Story of Seasons due to a licensing issue, but the team was also throwing around some other name ideas before they settled on what we have today. As you can see above, they considered titles like Summer Solstice, Autumn Wind, and Plow & Propose. I honestly can't believe they considered the last name. That has to be a joke!

Personally, I think "Summer Solstice" would have been a better name. It's two words like the original English title, it echoes the "time of year + astronomical event" theme, and it's an actual phrase people use, as opposed to the entirely made-up term "Story of Seasons."

Curious they never considered the Japanese name "Ranch Story" or some variant of it...

"Plow and Propose" this is worse than "Ninjugs" I'm screaming.

Yeah... hard not to notice the double entendre...