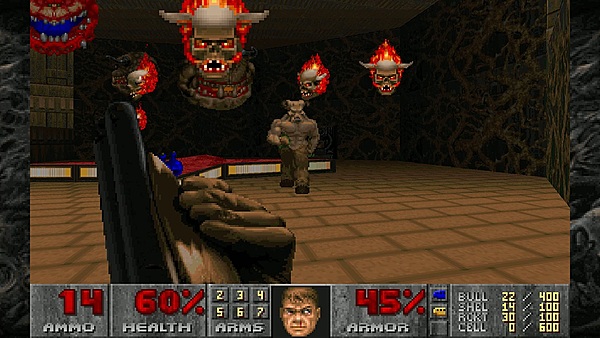 Bethesda is really knocking it out of the park with their support for the classic DOOM titles. Just today they've released an update for DOOM (Classic) and DOOM II that packs in new content, enhanced features, bug fixes, and more. Check out the full patch notes below.

A new update is available for DOOM & DOOM II on all platforms that includes audio improvements, QOL features and minor performance optimization. No End In Sight, with over 30 levels, is the latest to join our awesome line up of free Add-ons in DOOM.

The Audio has been overhauled, and positional audio should now work in all cases.
Sound distance falloff is now accurately using the same volume ranges from the original DOS release.
Objects that make consecutive sounds (such as the Chaingunner’s gun firing) will now correctly interrupt each other.

Chainsaw firing in Add-ons has been fixed to its original optimal buzz.
Sounds at 22khz (such as the Double Barrel Shotgun) now play correctly in Add-ons.
In the Add-on “No Rest for the Living”, Hell levels now use the correct hell sky texture.
Add-ons that are made up of multiple episodes can now be selected correctly.

Fixed stalls that may occur when quick loading the game several times in a row when Add-ons are active.

Quick Load and Save can now be bound from Customize Controls and will work without pausing the game.
Automap colors have been changed. It will now clearly mark doors, and keyed doors using red, yellow, blue, or white lines, making it quicker to find parts of the map that are unexplored.
Automap is drawn with pixel doubling to increase visibility and fix issues with lines disappearing.
Kills, items, and secrets are now shown on the automap during gameplay.

I was hoping Doom 64 would have all of the same features. I'm once again left without weapon quickselect in a classic Doom game. Woe.

Yeah, the lack of a quick select for weapons in Doom 64 is a major nuisance.

And I'm waiting for the motion control support for Doom 3, it's so weird that Bethesda added that only to Doom 64

You can probably credit that to Nightdive then, not Bethesda.

Panic Button did the port of Doom 3. Night dive did the one of the N64.

Still weird since Panic Button has put gyro aiming to Wolfenstein and Doom 2016 for the Switch.

I know, that's why Nightdive deserves credit. I'm sure it's them because the Turok games have it as well.

I got only the original super cheap in the last sale. Glad I waited to play it.

I do love giving OG Doom a spin every so often, there's something very therapeutic about it. Does anyone else play it with the music off? I find it makes it more sinister....

That's how the Jaguar Doom was, it had zero music but the silence and sound effects made it so much creepier.