Check out indie games that recently made their way to the Nintendo Switch system. 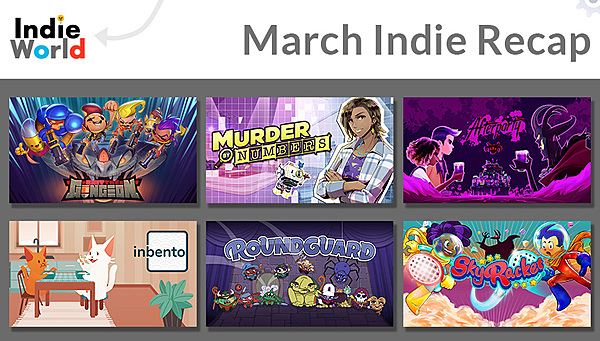 A ton of great independent games (also known as indies) are coming to the Nintendo Switch™ system every month. Below, you’ll find a few of the most recent releases.

The Gungeon has become a paradox and is collapsing! Armed with an ever-changing weapon, an insatiable need to loot, and the trusty dodge roll, each Gungeoneer must ascend and escape via their own route of increasingly perilous elevators.

Los Angeles, 1996. An actress on a hit detective TV show, Honor Mizrahi, now finds herself starring in her own murder mystery. Investigate a range of murders across TV studios, glitzy award shows, and more as you uncover a dark conspiracy. Interrogate a wide range of characters to clear Mizrahi’s name!

Recently deceased best buds, Milo and Lola, suddenly find themselves staring down an eternity in Hell. But there’s a loophole: outdrink Satan and he’ll grant you re-entry to Earth. Every step is up to you as you stumble your way through the underworld.

Fly over whimsical worlds filled with vivid colors—just you, a stylish scarf, and your laser tennis racket! Rain tennis-devastation down on hordes of ducks, cat-sandwiches, fluffy bunnies, space-tennis-robots, and BANANAS in this adventure to save the galaxy!

Open your cookbook, grab a lunchbox, and start preparing exceptional bento meals through the puzzles in inbento! Relax, tease your brain, and prepare tasty bento dishes. Arrange them in an elaborate lunchbox while sticking to the recipe shown on screen.

Castle Springbottom is under attack! It's up to the Roundguard to save the king and—more importantly—recover his gold! Fling your hero into the face of danger and bounce off hordes of dangerously cute monsters to reach the bottom of the dungeon.

GoNintendo Feature: Is it time for Super Mario Galaxy 3?
May 25, 19:39 by ridleysaria May 25, 19:32 by fylo
Marvelous forms financial partnership with Tencent, working on expanding IP globally
May 25, 19:29 by enthropy
Virtuous says they have "no doubt" they can handle ports of any current-gen game for Switch, talk about XCOM 2 Collection challenges
May 25, 18:31 by thedreaminghawk May 25, 18:17 by jayvir May 25, 18:12 by thedreaminghawk