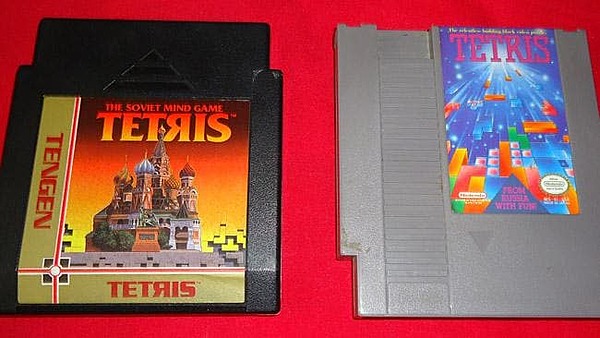 Back in the day, two different versions of Tetris were released for the NES. One of them came from Nintendo, and the other was created by Ed Logg of Tengen. Tengen was an off-shoot of Atari, which was created as a work-around for Nintendo's efforts to maintain control and regulate quality of the games hitting NES.

Nintendo didn't want developers flooding the markets with game after game with little regard for quality. That's why they only allowed developers to release 5 games a year for NES. Atari didn't care for this rule, so they created Tengen. One of the games Tengen was working on was a version of Tetris, and it's this game that would cause all sorts of legal trouble for Tengen.

Long story short, Nintendo gained the rights for all console versions of Tetris in the states, but Tengen planned to release their long-in-development version of Tetris anyway. Tengen did just that, and then after numerous legal battles, Tengen was forced to remove copies from retailers. They sold roughly 50k units, but ended up taking back hundreds of thousands of unsold copies.

In an interview with Nintendo Life, Ed Logg talks about how tough the situation was for him. He was the main programmer on Tengen's Tetris, and spent 3 years putting it together. It's very clear Logg believes his version of the game to be superior to what Nintendo put out.

“Heartbroken is a good summary. It was so much better than the version Nintendo did.”

I vividly remember seeing the Tengen version of Tetris at a friend's house, and I was so confused as to what it was. The cartridge looked completely different from other NES games, and I knew that Nintendo already had their own version of Tetris. I didn't know how the game existed, or why it looked so different! Unfortunately, to this day, I've never given the Tengen version a try. I guess I'm missing out!

Would any Tetris buffs care to verify if the Tengen version really is the best? I only have the Nintendo version.

EDIT: Forgot to add that the Tengen version has 2-player options.

Thanks for filling me in.

Ignoring subjective points like how it looks or music choices, the Tengen version includes 2 player vs and cooperative modes, so feature wise, it's superior no question.

Now its been a long time since I've played "high level" Tetris, so I don't remember specifics at all, but the Tengen game's algorithm is more gradual for spead/gravity increase and the frame per row decrease when you advance levels, making it easier as you go on. The problem ends up being at top level play, the Tengen game is near impossible to lose once you max out speed/etc. I recall the pieces spin differently as well, but I unfortunately can't remember enough about that specifically.

If you are casually playing Tetris by yourself, neither is really better outside aesthetic preferences.

If you want to play against a friend with a single system, the Tengen game is a better choice.

If you are hosting a tournament, the NES game is a better choice.

Thanks, that's actually pretty well explained! Sort of tempts me to find the Tengen version to compare.

Looking back I only really remember playing the Game Boy version growing up.

Well Nintendo has clearly dominated in this space ever since. From the N64’s “The New Tetris” to Tetrisphere to Tetris DS up to Tetris 99 now, Nintendo has definitely figured out how to deliver on fresh new Tetris experiences.

Eh. The gameboy version is still the best. Nothing beats portability.