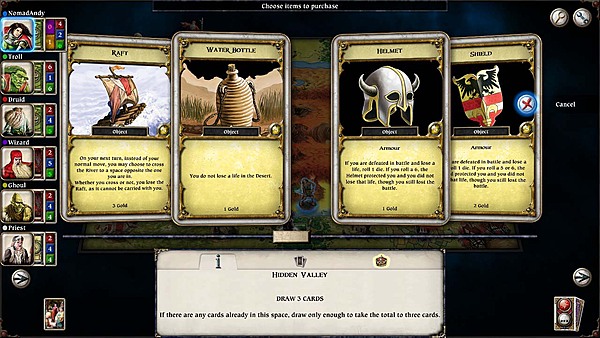 In Talisman, players embark on an epic quest through a land full of dangerous enemies and treacherous challenges. Players level up and increase their skills as they race against other players towards the center of the board in order to claim victory. This digital adaptation is based on the Revised 4th Edition published by Games Workshop, Talisman: Digital Edition.

Along with these Legendary Decks, today Nomad Games released an additional three characters for players to purchase. With the ‘Swordsman’, the ‘Witch Hunter’ and the ‘Ranger’ characters, players can experience the world of Talisman in even more ways than before.

“Talisman is a game with a very wide range of fans, but we wanted to make something that would appeal to those looking for an extra challenge” said Don Whiteford, Managing Director of Nomad Games. “We’re always listening to our community, and can’t wait to see what the hardcore Talisman crowd think of our latest creation!”

This new content for Talisman: Digital Edition is now available to purchase on PC and mobile. The Nintendo Switch update that includes this content will be released at a later date. In order to use a Legendary Deck, players must have also purchased the associated expansion for that deck.