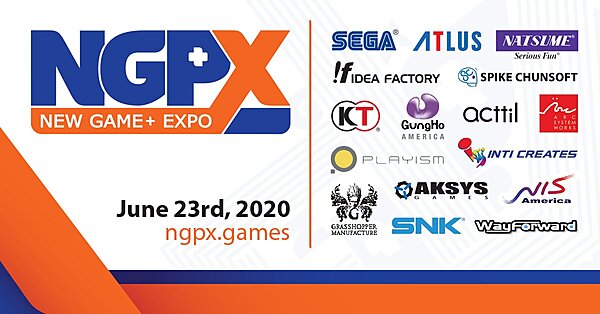 While we may no longer have E3 to look forward to, another gaming expo has appeared seemingly out of nowhere! New Game+ Expo has been announced, and will be taking place on June 23rd, 2020 at 8:00 AM PDT exclusively on Twitch. Participating publishers include: SEGA, Atlus, SNK, NIS America, Wayforward, Grasshopper Manufacture, Spike Chunsoft, Natsume, Inti Creates, KT, Arc System Works, Aksys Games, Playism, acttil, Idea Factory, and Gungho America. Check out the official PR on what to expect for the event below!

Welcome to NEW GAME+ EXPO, an online showcase of new and upcoming releases from a coalition of developers from around the world.
Featuring a diverse assortment of dozens of titles spanning every genre from action to puzzle-solving and even storytelling, this is your glimpse into what’s next from your favorite publishers!

Why didn't E3 just do this instead of just shutting down everything?